The requirements are quite nicely open-ended;-)

Here is a video of the final build that demonstrates: 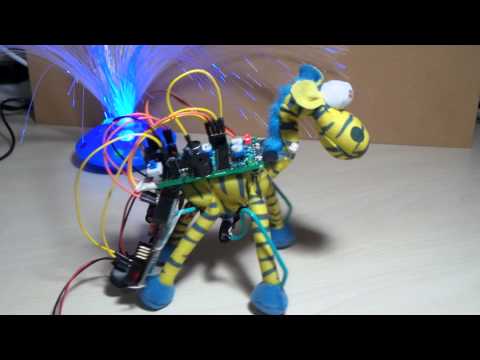 A couple of things to note in this demo:

The following video is a walkthrough of circuit functions on a breadboard prior to the final build: 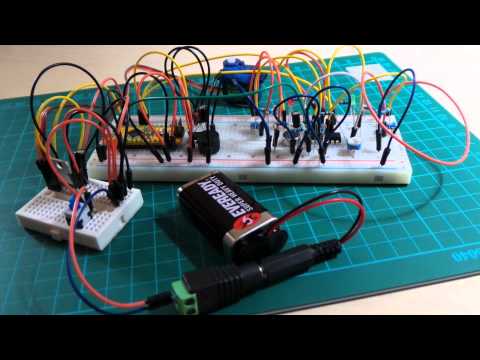 Girabot Design - My Take on the Robot Brief

I’ve decided to diverge from the suggested design in a couple of ways. The most significant being that I’m basing the design on an Arduino Nano microcontroller instead of an MSP430, mainly because I had one on hand, but also because it offers a relatively small form factor without compromising processing and I/O capabilities.

I’m also varying components and some details of the design in smaller ways. The following sections describe how Girabot is designed to meet the primary criteria. Along the way, I’ve referenced the experiments concerning various aspects of robot operation.

The Girabot is equiped with two LDRs - a “left eye” and “right eye”. In the current build they are mounted near the eyes and detect light sensitivity roughly +/- 90 degrees from front. I was thinking about wiring up through the neck so the LDRs could actually “be” the eyes, but haven’t tried that yet.

When Girabot detects relative darkness to one side, it will:

Use-case: Girabot responds when it hears a loud noise

The Girabot is equiped with an electret microphone. When it detects a loud noise (such as a clap or whistle), it will unlock a “special behaviour”:

The electret microphone is biased to about 1V, and the AC component of the signal tapped via C1.

The microphone signal is then fed to the LM324 setup as a subtracting amplifier:

When no microphone signal, we are reading Vcc/2 at the output.

But it is really sensitive to changes in the microphone signal. Basically every 1mV results in a 100mV change in the output.

The amplified signal is read by the Arduino, and when the signal exceeds a threshold, the Arduino triggers a tune played on the piezo speaker.

Girabot plays a tune on a piezo buzzer. This special behaviour is unlocked when it hears a load noise.

Use-case: Girabot can move itself

The sample robot design does a “bouncy” thing with two DC motors. I experimented with motor controls or various types, but after deciding on the Girabot form factor I’m thinking it is more appropriate for Girabot to be a “walker” than a “bouncer”. The walker design I’m attempting uses a single motor - similar to insect BEAM designs - and I’m using a servo motor for better positional control.

A single-motor walker can be a difficult thing to make work with reasonable efficiency, as it relies on the right combination of weight distribution, friction surfaces and geometry. Challenge accepted!

Worst case, Girabot is going to be a crappy walking but an outstanding dancer..

So far, power requirements for the various sub-systems are primarily 5V, with 9V alternative for the Arduino and the speaker sub-system:

Girabot is a pretty small build, so there’s not much room for batteries. Although the AA/AAA option would provided greater capacity, I think 9V is the way to go, purely from a size and weight perspective

So with a 9V source, I’m planning for two power rails in the system:

Given two power rails, there’s a question of which should be used to power the Arduino:

Either can work, although it is perhaps more efficient to power the Arduino with 5V regulated, as this eliminates need to use the Arduino’s (now redundant) internal regulator.

The servo motors in particular appear responsible for putting considerable noise on the power rails. The main side-effect is on the speaker circuit (the noise gets amplified as audible sound).

Reasonable noise abatement was achieved by filtering the power supply with 10nF capacitors across the power connections to the motors and each OpAmp unit.

Sensitivity of the Audio Detection Circuit

The electret audio detection circuit has proven quite temperamental. In particular, it appears quite sensitive to the power supply. As batteries discharge, the signal-to-noise ratio reduces noticeably and requires readjustment of the noise threshold.

The main workaround is to ensure sufficent power supply. I think a better solution - not yet attempted - would be to implement some dynamic threshold that is sensative to prevailing conditions.

So my experiements with a single-servo walker are a “partial success”. It can’t yet walk efficiently in a forwards direction. I am expecting that some more adjustments of weight balance and friction pads on the feet would yield a better result.

But it does try!

See Girabot.ino and associated *.h files for all the code.