Checking out the Maker UNO, a feature-packed Arduino-compatible board from Cytron in Penang, Malaysia.

Here’s a quick video of the board in action: 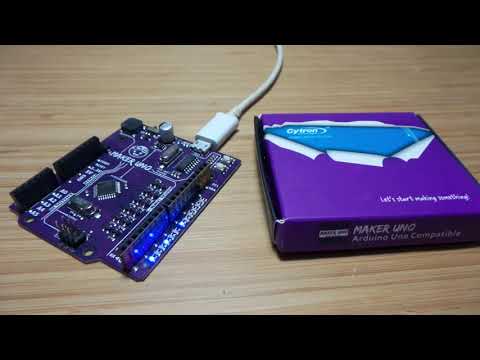 I was recently shown an Arduino-compatible board made by Cytron in Penang, Malaysia called the Maker UNO. I gather it began life as a very successful kickstarter that aimed to produce a better board and associated teaching materials for K-12 education.

It packs quite a few additional features in the Uno form-factor:

It uses the CH340G USB-UART chip for USB connectivity, so additional drivers may be required. See LEAP#405 ATmegaSerialProgrammer for a deeper dive on the CH340G.

The full schematic is available from Cytron:

Here’s a re-drawing that focuses on the details of the digital pin features. In particular, note:

The MakerUno.ino sketch is a simple demonstration of the features, requiring no additional components: