Build a USB to TTL serial interface on a breadboard using the CH340G interface chip, and use it to program Arduino sketches on an ATmega328P.

The CH340G is a USB to UART Interface chip. It is often used as a cheap alternative to more established brands and products such as the FTDI FT232RL. The CH340G is commonly found in:

In this project, I’d like to see how easy it is to build a USB to Serial interface on a breadboard. To test it out, I’ll use it program Arduino sketches on an ATmega328P.

Drivers and Setup for MacOSX

If the CH340G serial chip is not recognised my MacOSX, a driver is required. See:

I have some CH340G chips in SOP-16 package (from a seller on aliexpress). I’ve mounted one on a DIP adapter, and found a micro-USB breakout:

I have a CH340G USB adapter that I got along with an Arduino mini, so I took a closer look to see if it usde the CH340G chip in any unexpected ways.

Tracing the circuit, it turns out to be very straight-forward. A few things to note:

Building the CH340G Interface on a Breadboard

On one breadboard, I have a basic 5V CH340G setup:

On another breadboard, I have an ATmega328 (with Arduino bootloader) wired up for programming. See LEAP#405 ATmegaSerialProgrammer for more on programming over serial.

Here’s a quick demo (uploading a sketch). I’m programming the ATmega328 with the UsbUartCH340G.ino sketch - a simple blink variant that also sends bursts of serial output (to exercise the RX LED). 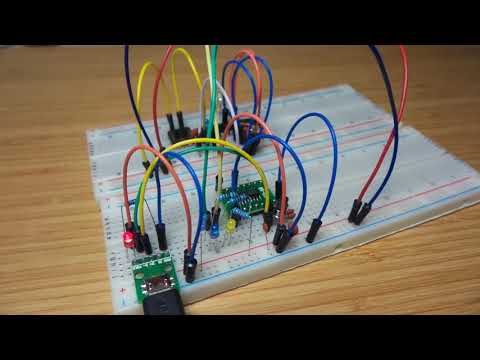 A final prototype before doing anything more serious - I’ve switched to SMD components and built up for testing on some protoboard with DIP adapters. A few changes to the design:

The device pinput sequence I’ve selected is as follows. This suits some devices, but may need wires crossed for others.

Here’s a sketch of the layout I used: