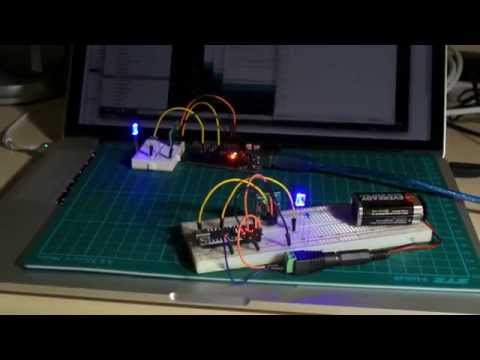 This is a continuation of the LEAP#063 RFSwitch project which demonstrated simple RF analog communication with a pair of inexpensive 433 MHz modules.

This project adds microcontrollers at both ends and runs a digital transission over the RF link using an Amplitude Shift Keying (ASK) protocol.

One thing that became immediately clear is that the ASK protocol has done an excellent job of dealing with the noise that was so much in evidence with the analog RFSwitch project.

I’ve only been transmitting at short distances however (5m max), but I’ve yet to even need to attach an antenna to the RF modules.

The sender is an Arduino Nano (no particular reason why, except it was handy). It periodically sends an on or off signal, with an LED to indicate what it has sent.

The data sent is actually the bytes representing the actual words “on” or “off”, just to play with some different data types on the wire. The default maximum message length implemented by the ASK library is 60 bytes.

The receiver is an Arduino Uno (again, no particular reason why, except it was handy).

It polls for data, and when it receives a valid packet, it decodes it as a string and checks for the on/off state. It then sets its LED in accordance. So when sender/receiver are running, their respective LEDs should flash pretty much in unison (with a slight delay at the receiving end)