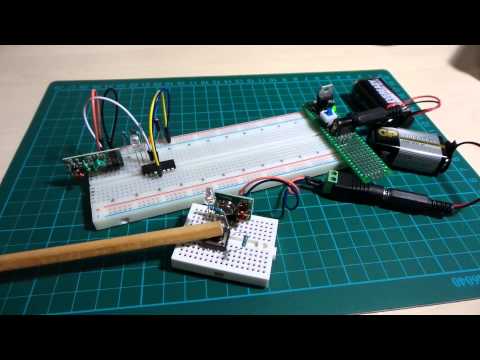 Paired RF transmit/receive modules are widely available at low cost. The modules I have came from aliexpress for 0.80USD with free shipping. Can’t ask for a much better deal than that!

I believe that these devices fit into the general category of short range/low-power devices and specifically LPD433 - low power devices operating on the 433 MHz UHF/70-centimeter band.

Before diving into using higher-level data protocols over the RF link, I was inspired by various youtube videos to test the devices with the simplest analogue switch circuit. A sampling of the many youtube videos on the subject:

So in this circuit, there’s no microcontroller or anything fancy, just the RF modules communicating with each other and transmitting a button press to blink a remote LED.

As much as I can glean from available datasheets:

Simply has a button wired up with LED indicator. When not pressed, the Data line is pulled low. When the button is pressed, it pulls the data pin high. The LED indicator on the sender-side is merely to confirm that a data signal was raised. I’ve wired up the sender to a 9V battery.

The receiver is powered with 5V. When data is received, it takes the data line high.

Initially, I just had an LED wired to the data line. That worked reasonably well: press the button on the sender, and the receiver blinks the LED! How simple is that?

However, when the sender is not transmitting, the receiver does seem to pick up quite a bit of noise. I managed to filter out the noise to the point where it is 90%+ clean with two simple measures:

Next up I’ll be looking at using the RF links with an Arduino. I’m interested to see if libraries like RadioHead obviate the need to do this analog signal processing (answer is yes!):

Here’s the breadboard layout and schematic for the simple RF switch:

This turns out to be very simple - just alter the transmitter layout so the pushbutton is a power switch for the transmitter configred for continuous transmission. From the little testing I’ve done, this works just fine!