AM/MW radios are of very little use these days in Singapore. There is no local AM broadcasting, just a few stations from Indonesia and Malaysia that can be picked up if you’re lucky. However, there’s still a great deal that can be learned from studying simple AM superheterodyne circuits. I have built a similar kit before - the HX-6B, see LEAP#123 - but I probably know more than I did then, so I’m looking forward to this little opportunity to revisit similar ground.

Although it’s possible to build the entire kit in under an hour, I decided to carefully follow a sub-system by sub-system build from audio out to RF in. Co-incidentally, K7QO is posting an excellent series covering the build of an HX108-2 at the same time … so I am heavily cribbing from there;-)

The HX108-2 is a pretty popular kit, and a number of very good tutorials can be found on YouTube describing construction and tuning. Here’s a selection…

K7QO had a series covering the build that appears to have been subsequently re-cut into a series on RF Receivers. The main videos covering this particular radio are part 6 and 7: 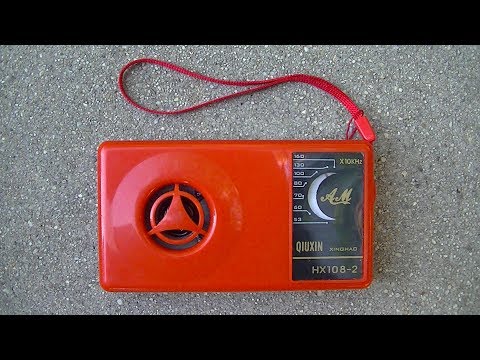 The Radio Mechanic: an excellent desktop freeform build of the HX108-2 circuit: 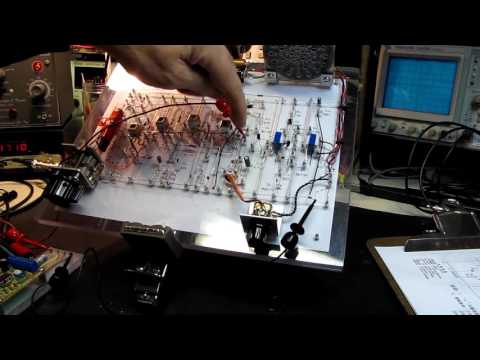 I purchased my HX108-2 kit from seller on aliexpress. It was generally OK, with no missing parts. The only negative was that the speaker was somewhat corroded.

The basic specification for the kit:

The transistors are classified by ß(hFE), and it seems many kits substitute different parts of similar capability:

I stuck all the parts in a component testers, and found that one of the 9013H had a much lower ß(hFE) than the others, so I replaced it from spare parts. Might not have been necessary, but avoided a potential issue.

There are two audio transformers used in the final stage:

I received a 绿 green and 黄 yellow in my kit. For reference, I measured the resistance of each coil:

There are four transformer cans used in the design:

While not essential, I decided to tune the IF and demodulator cans to 465kHz prior to installation so they should not require much fine tuning later. Note: 455kHz is the conventional intermediate frequency, but the circuit states it is designed for 465kHz so I went with that.

I tuned the transformers with a 2V peak-peak 465kHz signal from a function generator directly connected to the 2-pin/single coil side of the transformer, and monitored the output with an oscilloscope with the following results:

For B2 红 red, I simply measured its tuning to make sure it was broadly in the ballpark. I’ll fine tune it in-circuit:

The PCB has a reasonably good silk-screen to assist with construction:

The schematic provided with the kit contains a number of errors. This is a copy that I have annotated with the necessary corrections:

The HX6B is a superheterodyne receiver design with two IF stages. The circuit basically maps to the following stages:

A quick sketch from my notes on the functional design:

The PCB includes a number of test points with a specified current range:

I believe the way these test points should be used is as follows:

Since I’m going to build the circuit by stages, I don’t think I’ll be able to make these measurements as I go. I could go back after the kit is complete and un-bridge and test each stage.

Can’t achieve much without power! There are actually two “power rails” in the circuit:

Mounting the speaker and battery clip in the housing. Speaker is connected to the PCB, however I’ve left power disconnected for now as I’ll use a bench power supply for testing so I can read off total current and voltage.

This step adds the audio pre-amp and power amplification stages, starting from C8/R9 - which is where I’ll inject a test signal to verify things are working. Note:

Next, with the volume set to roughly 60%, total current drawn is about 86mA, and the output (CH2-Blue) is already clipping, running at about 4V peak-peak (gain ~ 10)

As I increase the volume, current peaks at about 120mA. Interestingly, the current draw and volume does start to fall off at over say 80-90% on the volume control pot. This probably indicates something in the push-pull configuration is starting to break down (but in a “safe” way).

The V4 transistor is being used as a detector in this stage.

All the remaining parts:

Since we don’t have any AM stations in range, I did a rough manual alignment against some digital signals in the local MW band. I read the frequency with a commercial radio, then adjusted the HX108-2 so that the signal appears at roughly the same frequency according to the front dial.

Since I’m tuning with an ugly digital signal, I can’t really tell if the IF and demodulator stages are perfectly aligned, although they seem fine and couldn’t be improved much with fiddling. The main thing I needed to do was adjust the oscillator so that the frequency range roughly lines up with the decal/front dial. I got “close enough for now” by just adjusting B2 红 red:

Step 9: Putting it all together

My local AM band is completely dead (has been for years) so now I have a perfectly functioning but absolutely useless doorstop;-) But this has been great revision on simple superheterodyne receiver design.