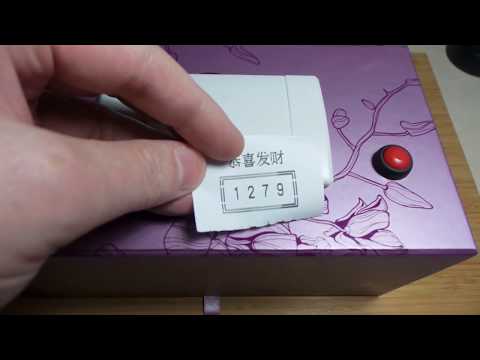 So now I’ve figured out the basics of using the JP-QR701 Thermal Printer (see LEAP#523 Basics), time to do something a little more interesting(?)

Singapore has a “4D” (four digit) lottery that is especially popular during festivals like Chinese New Year.

This project generates “Lucky 4D” numbers at the press of a button. It’s a simple build, but I threw in an extra challenge - finding out how to get it to print Chinese characters.

The JP-QR701 specifications indicate that it has GB2312 support. I think this also applies to similar products that all seem to come from the same OEM or at least from the same design.

Most documentation - especially that found from English-language distributors - is however lacking in any detail on how to use the Chinese language support.

After a bit of digging around, I eventually found some documentation on the OEM 厦门精普电子科技有限公司 Xiamen Jingpu Electronic Technology Co Ltd site that revealed the trick - specifically in the QR701 Module Instruction Manual

Note: this is not a universal solution - it appears other printers may use other commands. The Kashino Technology CSN-A2 - that I believe may be the OEM for the AdaFruit Mini Thermal Receipt Printer (product ID 597) - appears to uses an ESC 9 n “select Chinese code format” command.

I’m going to add 恭喜发财 to my 4D prediction for that extra dose of prosperity. I need the GB2312-80 coding, which I got the hard way by looking it up in some GB Code Tables:

I’m using the Adafruit Arduino Library for Small Thermal Printers, however this doesn’t directly support the required commands, and unfortunately hides away the necessary support functions inside the library’s private interface.

As a quick work-around, I’ve used a local copy of the Adafruit_Thermal.cpp and Adafruit_Thermal.h files and made a single modification: moved the writeBytes methods to the public interface.

So now I can send some Chinese characters (printed with all current settings applied e.g. size, weight, justification) like this:

The electronics are straight-forward:

I’ve mounted it all in an old Raffles Hotel mooncake box for that extra (though conflicting) festive feeling!

All ready to play: