An auto-ranging ohmmeter that uses an LCD and RGB LEDs to display the best-matched E24 standard resistor color code for the measured resistance. 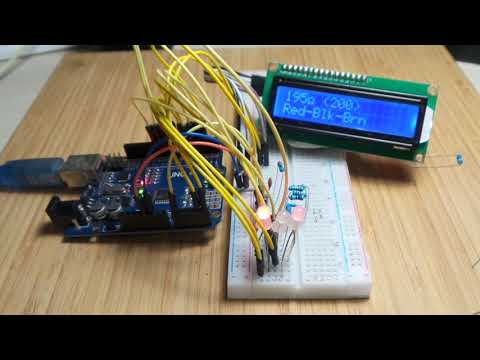 I like this kind of idea - ingenious, but not very practical - and it inspired me to do something similar. I’ve taken the basic idea run with it..

This project is a Ohmmeter featuring:

Conclusion: the ohmmeter works pretty well, but the RGB LEDs are a little unconvincing for some colors. I may make a PCB just for kicks to present this a little better..

The test circuit puts a known resistor in series with the unknown resistor, and a voltage measurement taken at their junction.

This comprises a voltage divider:

And the unknown resistance can be calculated using Ohms Law:

The Arduino’s ATmega328P uses an integrated 10-bit analog to digital converter, producing integer output ranged from 0 and 1023. With the default 5V reference, this means a resolution of only 4.883 mV.

As such, the value of “known” resistor in the voltage divider is quite important to keep readings within useful range. Best result is when the known and unknown resistors are similar in size.

So to cover a decent resistance range, the circuit “auto-ranges”… basically switching in different known resistors to find the most suitable. In this circuit, I’ve included 4 known resistor options (220Ω, 1kΩ, 10kΩ, 100kΩ) to allow an effective range from ~55Ω through to <400kΩ.

The auto-ranging works by:

The result of that process will either result in a valid reading using one of the known resistors, else no result - meaning the unknown resistance is either:

Once the standard resistor value has been calculated, it is represented with a 3-band display:

The 3 RGB LED outputs are multiplexed so only 6 pins are required:

To allow a relatively flicker-free display whil not interferring with the resistance measurement, the RGB LED multiplexing is handled by a timer interrupt. The interrupt using Timer2. I was concerned this may affect the PWM functions on pin 11, but it seems to coexist quite happily.

The display is based on the 4-band standard, but with band 4 ignored as that can’t be accurately inferred from the readings.

The following table summarises for each color:

That the RGB duty cycles I have chosen came about with a deal of experimentation. The best values are also affected by the chose current limiting resistors for each color:

Note that as I am using common-anode RGB LEDs, the duty cycles mentioned above are inverted in code as a PWM “high” level will turn the LED off and vice versa (i.e. active low logic).

For completenes, here are the color codes for tolerances, though unused in the application:

The program RgbOhmMeter.ino uses a couple of libraries: