I’m trying to improve the range of nRF24L01+ some modules, and searching around for advice such as the post on fixing your cheap nrf24l01+ pa/lna module.

One thing to check of course is channel congestion.

The RF24 library comes with a scanner example, which I used as the basic inspiration for this project.

I’ve modified the code somewhat and added a Nokia5110-type display.

The Nokia 5110 LCD I have uses an SPI interface. I tried unsuccessfully to get the nRF24 and LCD modules to play nicely together with hardware SPI. In the end I gave up and switched to software SPI for the LCD display (using the Adafruit PCD8544 library), and hardware SPI for the nRF42.

Here’s the mapping from the terminology used by the 5110 and nRF24 modules and pins on an Arduino Uno.

The Scanner program is an extension of the RF24 scanner example. It shows the channels that present a carrier.

It is pretty basic, and the display is a bit cramped to fit on the LCD display. Some improvement ideas:

Tested first on a breadboard:

I decided to package the project in an enclosure:

The full schematic for the module is available here in EasyEDA:

I’m using some protoboard, and here’s a sketch of the basic layout:

In a plastic enclosure: 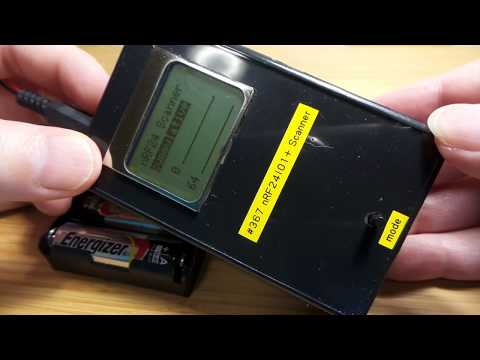