Two Arduino’s entertaining themselves with a game of “ping pong” over nRF24L01+ 2.4GHz RF.

Here’s a quick video of a “game” in action: 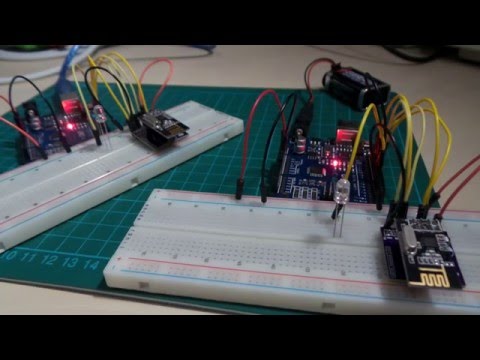 I’m using the maniacbug/RF24 library and the code is based on examples provided.

The PingPong.ino script runs on both the “ping” and “pong” node. A ground link on pin 8 tells that aRduino to play “pong”. Here are the rules of the game:

This is not really stressing the communications, but a nice way to prove the basics are working.

NB: I’m using these nRF24Breakout modules to make it easy to breadboard the circuit.

See the schematic for details. Here’s the summary of pin connections to the nRF24L01+ module:

According to the datasheet:

That’s almost perfect for driving with an Arduino Uno, with the exception of the maximum current draw:

But I’m going to chance it for a quick demo, as many others seem to have done quite succesfully. For a fixed installation, I think I would provide a stiffer external 3.3V supply to avoid overloading the Arduino’s onboard regulators.