Here’s a quick video of the module running the demo code: 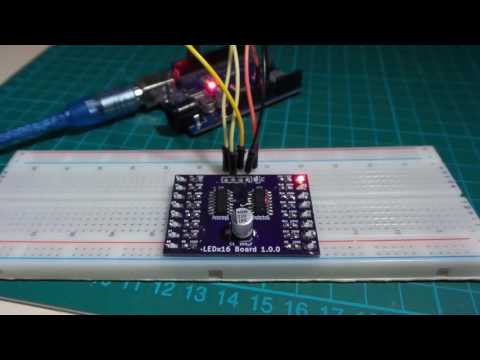 This is my version of project 3 from the KiCad like a Pro course from Tech Explorations.

The board exposes a dual 74HC595 shift register interface for microcontroller control of an array of 16 LEDs with current-limiting resistors.

The PCB design was done with KiCad.

I haven’t sent the boards for production yet - first sourcing and verifying the SMD components. When I’ve built and tested the board, I’ll update and share the OSH Park project and Arduino code.

I sent these off for production at OSH Park, and they turned out quite well. I think I could have picked a footprint for the SOP16 ships with longer pads to make them easier to solder by hand.

One variation I’ve made in the circuit from the KiCad like a Pro course: I’ve explicitly grounded pin 13 (output enable - active low). If left floating, I’ve found the circuit to be unreliable depending on power conditions (output enable floats high).

See the KiCad project for all the details. Here’s the result:

The LEDx16Module.ino sketch runs a simple demo sequence on the board from an Aurduino using hardware SPI.