Here’s a quick video of the cube in action: 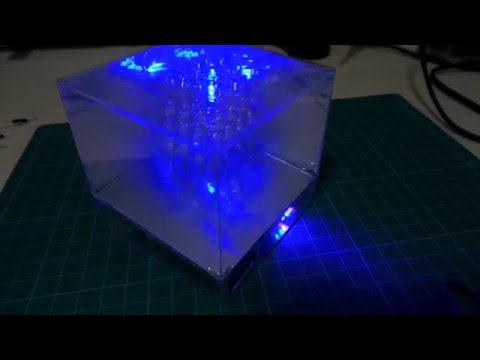 LED cubes were a “thing” a few years back maybe … but I’ve never built one. Time to fix that…

It’s encased in a Ferrero Rocher cube box. During the build, that raised some challenges - most of the effort in building the project concerned squeezing all the electronics into the space in the lid (which becomes the base of the cube). Nvm, it all fits and the result it pretty good.

See the schematics for the full details. Here’s how the design breaks down:

To pack this all into the Ferrero Rocher cube, the components are arranged on two boards:

The boards are inter-connected with 20 pins. It would have been nice to use a plug/socket connectors to allow easy disassembly, but in order to save space, I directly connected (soldered) the boards with a set of pins. Since this is not easily reversible, it encourage me to rigorously test everything before final assembly, and it also meant planning the layout was important because I wouldn’t get a second chance to rethink a decision. So I did lots of drawings, practice assembly, and testing circuit sub-modules as they were constructed.

So far, just a few for demonstration purposes…

The code is organised so that each pattern is in its own (header) file.

So there are 64 LEDs to drive in a 4x4x4 cube - way more than GPIO pins of a typical MCU. I’ll be solving this problem the standard way - using 74HC595 shift registers to drive all the LED controls required with only 3 GPIO pins.

This involves multiplexing the output so we write 16 LEDs in one go, and relies on persistence of vision as the code cycles through the display of 4 layers of 16 LEDs in rapid succession.

It’s possible to clear the 595s by toggling the OE and MR pins, but that would require more connections and extra logic. So I do this with software - shift out a full 24-bits worth of 0s to get the 595s to a “known state”.

With a 5V supply and blue LEDs for a forward voltage of 3.0-3.2V, we’ll drop about 2V max across the resistor. Aiming for 10mA LED current, that means a current limiting resistor of about 200Ω.

The “utility” LEDs will however be a selection of red, green and yellow all with a forward voltage around 2V. At 10mA that calls for a resistor more like 300Ω.

That’s the theory at least! But in practice, apparent brightness is more a function of LED construction than current. The clear blue LEDs I have are super bright even at 4mA.

So, perception is what counts! Here are the resistor values I’ve chosen for the the different LEDs to achieve a suitable brightness:

I think I’ll use 2N7000 MOSFETs - no particular reason except simplicity. I’ve put 10kΩ resistors in the gate connection; these are not strictly required expect perhaps to protected the MCU from a current surge in case of a failing FET.

NB: see the assets folder for more pictures of the build

LED Base Board Construction