Here’s a quick video of the module in action: 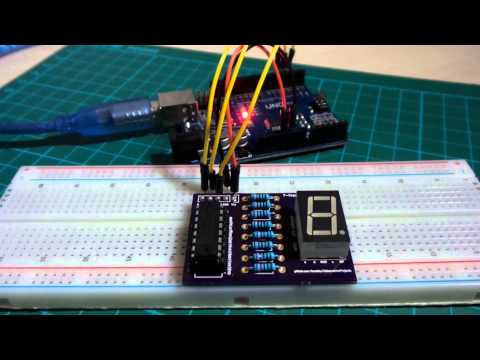 This is my version of project 2 from the KiCad like a Pro course from Tech Explorations.

It is essentially the LED7Segment/ShiftDrive project but as a custom PCB. The PCB includes a single 7-Segment LED, current limiting resistors and 74HC595 shift register.

The PCB design was done with KiCad.

I sent these off for production at OSH Park, and they arrived (in Singapore) a month later (Jan 17th -> Feb 17th). They turned out quite well, certainly no issues with the fab.

After examining the PCBs, I found a few things that could be improved in the design:

But they work just fine!

Here’s a summary of how the bits in the shift register are mapped to LED segments:

The ShiftDriveModule.ino sketch drives the module with a simple counter from 0-9, with the decimal point lit for even numbers.

The script manipulates the data/latch/clock output directly (no SPI), and assumes the following pin connections:

See the KiCad project for all the details. Here’s the result:

Here are the finished boards. For the one I’ve already soldered I first used male pins (to plug-in to a breadboard), but if I do another I’ll probably use female pin headers instead.