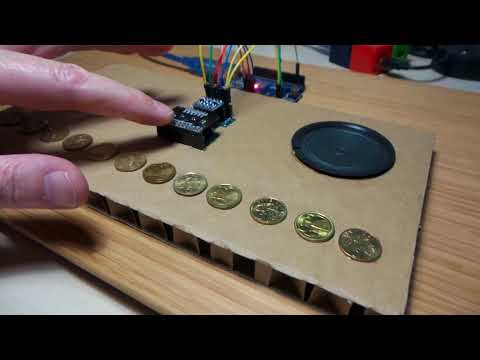 The MPR121 is a capacitive touch sensor. Originally produced by Freescale (now NXP), the part is end-of-life but still widely available, especially on breakout boards like this one.

Both Sparkfun and Adafruit have procude boards and tutorials at one point.

I think I first picked up one of these modules after watching Julian Ilett’s video: 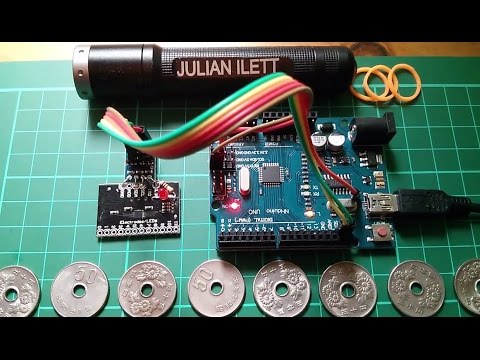 The MPR121 is a <3.6V device, but I’m testing it here with an Arduino Uno running at 5V. The Uno conveniently provides 3.3V, which is fine to power the module, but that doesn’t help the I²C bus and interrupt.

Although I believe some have run the I²C at 5V without immediately destroying the module, I’m running the bus through a level shiter module.

Since the interrupt is output from the module (active low), it doesn’t need level shifting.

I decided to use 12 old 5 cent coins for touch control, and mount it on some Ikea honeycomb cardboard packing material (surprisingly useful for quick builds).

Some protoboard with headers provides mountings for the MPR121 and level-shifting modules.

An 8Ω speaker with 100Ω current-limiting resistor is also mounted on the cardboard base.

I decided not to build-in and Arduino, so just provided a row of headers for connecting an external Arduino

My sketch of pin layouts on the protoboard:

All connections on the underside of the cardboard base: