Getting up and running building XC8 C projects on MacOSX and a PIC12F675. Let’s get Blinky again!

As the PIC12F675 is one of the lowerend 8-bit chips in the PIC family, I wasn’t sure at first how well it might be supported by C compilers. Well, I shouldn’t have been concerned. In addition to support from independent compiler makers, Microchip offer their own XC Compilers

This project is a quick test of the MPLAB XC8 compiler, which supports all 8-bit PICs, is cross platform and has a free version available!

I started with a useful tutorial by Luke Briner explaining the differences between assembler and C code for a PIC: 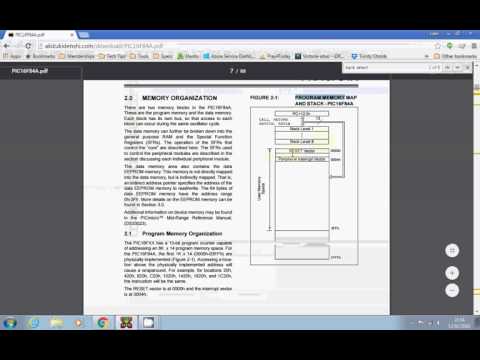 A quick summary. Many of these settings can be changed later in project properties.

Select a debugger (if any):

Select a programmer (or do this later):

Select name and folder for the project:

The configuration word (address: 2007h) - documented in section 9.1 of the datasheet - is used to configure chip features. The IDE includes a configuration bits editor that can help derive suitable values.

In XC8, these are conveniently defined with pragma. I’m using a basic configuration, with a 4MHz internal clock and all other features disabled:

With MPLAB XC8, it is not necessary to specify the device in code. Instead, the IDE records this in the NetBeans nbproject/configurations.xml file. That makes the code more portable to other devices, but not to other toolchains.

One of the main benefits of coding in C instead of assembler is that bank switching is handled automatically.

This is a trivial demonstration of GPIO port manipulations, toggling active-low LEDs on GP0 and GP1. There are a number of ways to toggle multiple bits in a port (and at least one way to do it wrong!).

One can write directly to the GPIO port, use the GPIObits struct, or even use the MPLAB Code Configurator (MCC) tool to generate boiler-plate pin functions.

I’m using GPIObits in combination with a shadow register. This makes bit manipulation very explicit and understandable, while ensuring no undesirable flipping of neighbouring bits.

What I discovered you can’t do safely is this:

.. because bit changes may not be fast enough to be read reliably for the next bit-flip, meaning that changes get “lost”.

I initially tested the code using a PIC12F675 Development Board as detailed in LEAP#331 GettingBlinky. Works like a charm!

Next I wired up a stand-alone PIC12F675 on a breadboard

Programming and running when powered by the programmer:

And running independently with a 5V power supply.