Figuring out the navigation light strobe frequency of the Lambda-class shuttle “Tydirium” and building a freeform circuit sculpture to demonstrate the effects (running an ATtiny85 on 3V). 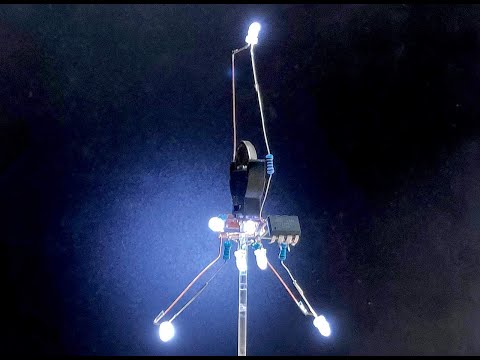 I’ve recently discovered the ModelGeek podcast and started bingeing the back catalog. In ModelGeek’s Podcast Episode 1; Who the Heck Are the ModelGeeks, What Do They Build and Why? one of the hosts (Andrew Frill) talks about wanting to put the navigation lights on a Star Wars Shuttle Tydirium AMT/ERTL model (at around 0:48:40).

How would one do that? And what is the correct blinking sequence anyway? Good questions that got me thinking … and heading off down a rabbit hole..

What is the Navigation Strobe Pattern?

My searches turned up quite a bit of information about Lambda-class Shuttles, but nothing definitive on the running lights sequence.

So I went back to source and checked out one of the clearest scenes: Star Wars: Return of the Jedi - Shuttle Tydirium Approaches Endor.

I ended up chopping the clip up and adding a time sync: 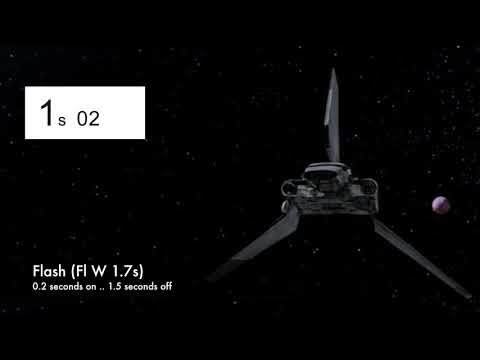 There are many possible circuit designs. The first two that come to mind are:

The 555 timer approach is a nice “hardware only” solution, but it can be a bit of a pain to get the timing just right. So for this demonstration, I’ll use a microcontroller.

The sketch TydiriumStrobe.ino is about as simple as it gets - toggle the GPIO with the appropriate delays. I programmed the ATtiny85 to run at 1MHz with internal clock, with the code uploaded using an Arduino Uno running ArduinoISP. See LEAP#070 for more info on programming the ATtiny85.

Very simple circuit, running at 3V on a CR2023 coin cell. The 3mm bright white LEDs I’m using have a nominal forward voltage of 2.7V, so a 75Ω current limiting resistor will keep current around 4mA. I’ve rounded up to 100Ω resistors.

Watching LEDs flash on a breadboard is a bit boring, so my evening turned into a bit of a zen wire bending session. The design is ad-hoc and judged by eye, but I think turned out to ba a reasonable representation of a Lambda-class Shuttle in only a few components and wire off-cuts!