A walnut, Brengun 1:144 Kübelwagen and a miniaturised SMD version of a BJT oscillator - and with a bit of practice, some close-up model magic. 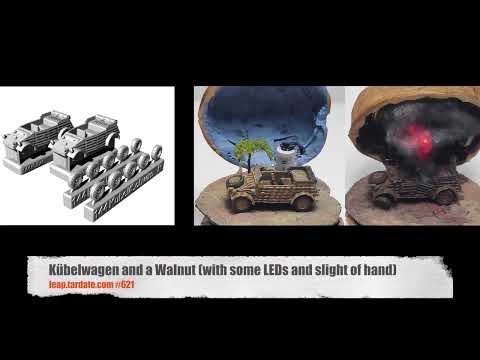 I picked up this pair of 1:144 Kübelwagen on impulse when buying a PE kit from Hauler/Brengun.

They sat on the shelf for some time. I think it was seeing some artwork for Episode 21 “Going small” of the just making conversation podcast that inspired me to wonder if I could use the two vehicles with a bit of sleight of hand…

I asked James & Malcolm from the podcast about the artwork and they clued me in: The original model was by Mike Zax. He has a video covering the build: 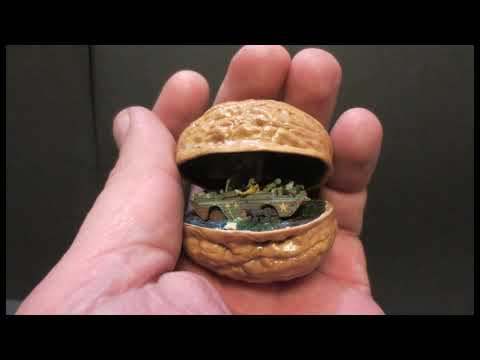 In the “exploded” view, I have some fast flashing LEDs to intimate a blazing fire. I’m using a simple BJT oscillator, but with SMD components and a 3V battery holder to try and conceal it within the shell of a walnut.

The circuit uses a tilt-switch to turn on the circuit when up the “right” way.

I verified this on a breadboard first in order to finalise the component selection. I settled on 1µF capacitors and 100kΩ resistors for the RC circuit, leading to a relatively fast flash of around 7.2 Hz.

I used a small piece of perfboard for mounting the SMD version of the circuit as compactly as I could.

The Brengun kit is very nice - resin with PE and decals for quite a detailed model at 1:144. I think the front door handles are back-to-front however, ended up fixing this.

I grabbed a handful of Vallejo Model Color for the paint. Didn’t record all the paints used…

Just a Walnut shell, carefully split with a piece of plasticard as a ground plane between the two halves.

With the Kübelwagen in place.

On the reverse, we have the destroyed Kübelwagen with a plume of smoke and the LEDs flickering like flames. Don’t know exectly what happened, but it was pretty devastating!