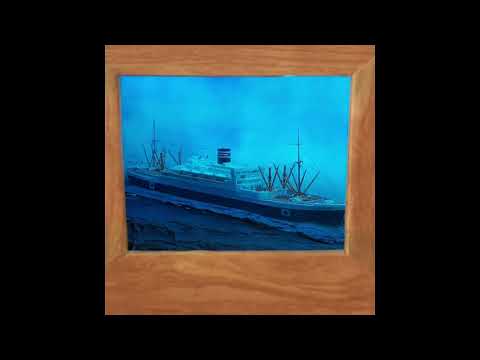 And here’s a behind-the-scenes view of the box diorama in action: 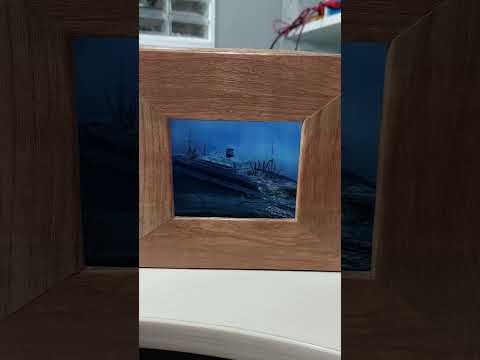 When I discovered that Aoshima had 1:700 water line kits of both the Yawatamaru and Un’yō (both new tools from 1982), the lure was irresistible.

The interesting question was how to display the ships to best effect to describe the conversion. I wondered whether a box diorama with a Pepper’s ghost illusion would work.

Well, I finished making the kits back in 2021, crated the basic box diorama and electronics in 2022 but it then sat on the shelf waiting for me to come and tweak the effect. Which I finally did today (2023-01-02) - just before I need to go back to work;-)

The Aoshima kit No. 045718 of the liner Yawatamaru (日本客船 八幡丸) is available in recent boxing but is a 1982 tool. It is however reasonably well detailed and goes together just fine.

Still got some tidying up to do - windows, weathering, rigging

The Aoshima kit No. 045220 of the escort carrier Un’yō (日本海軍 航空母艦 雲鷹 ) is available in recent boxing but is also a 1982 tool. Like the Yawatamaru it is reasonably well detailed and goes together just fine.

So.. the thing about building carriers!!

Pile-up on the flight deck

Finished the main build of the Aoshima 1:700 kits (rigging and weathering to come).

finishing details for the Un’yō - a little rigging, rust effects and modulation

the Yawatamaru gets some rigging

The Arduino sketch YawataMaruUnyo.ino is programmed to the ATTiny85 with fuses set for 8MHz internal clock. I used ArduinoISP to program the chip via an Arduino Uno.

LED strips are connected and used as follows:

The circuit diagram is as follows. A 12V DC power supply drives the LEDs, with a buck converter module stepping the voltage down to 5V to power the ATtiny85.

The sketch was initially tested on a breadboard:

I transferred the design to a small piece of protoboard. Layout sketch:

Internal layout showing the one-way mirror on 45˚ angle in front of the Yawatamaru is a piece of acrylic with silver insulation window film applied to the rear.

Power jack and switch on the rear..

Looking through the window when the Yawatamaru is illuminated:

Looking through the window when the Un’yō is illuminated:

Here’s a demo of the final effect:

And here’s a behind-the-scenes view of the box diorama in action: