Testing some mini/micro linear servo motors with an ATtiny85.

Most common servos are of the rotary kind. Linear servos are a little more rare and tend to be a bit more expensive but they do have some advantages, such as generally more compact design.

In this project note, I’ll be putting a few mini/micro linear servos through some basic tests.

Here’s the basic setup. By default I have the ATtiny85 flashed for 8MHz internal clock, and I’m using PB4 (pin 3 on the DIP8 ATTiny85) as the servo control pin.

See MiniLinearServos.ino for the test sketch. It uses the SoftwareServo library. These servos can easily be used from as Arduino by switching to the standard Arduino Servo library.

These GS-1502 servos were from a seller on shopee.sg, and come in a matched left/right handed pair.

This serve works very well. I had to adjust the minimum pulse width to 832µs with the command myServo.setMinimumPulse(832); to allow a full range potisioning from 0˚ to 180˚.

With the 540µs default setting, the servo would automatically return to “home” (180˚) whenever positioned below 27˚. 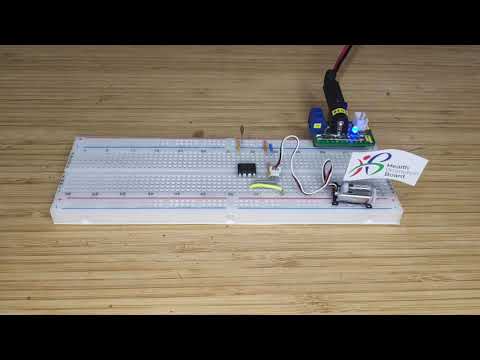