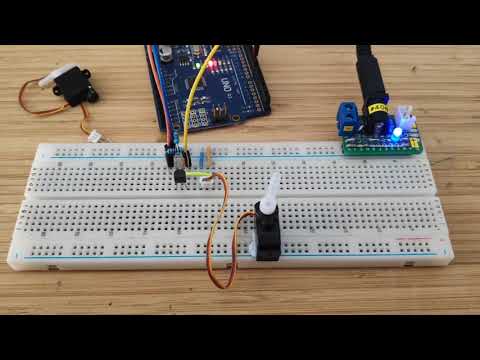 So-called low power / mini servos are generally designed to work from lithium battery packs in RC vehicles - so voltages in the 3.7 to 4.2V range. I have a few of these servos, and the notes that follow document some quick tests using an Arduino Uno as a driver.

Available from shopee.sg, aliexpress and other sources.

In practice, the servos I got worked smoothly from ~3.5V

Available from shopee.sg, aliexpress and other sources.

In practice, the servo I got seemed to need at least 4V to rotate smoothly.

Since the Arduino runs at 5V, the PWM control signal is put through a MOSFET level shifter to prevent damage to the servo. NB: I suspect the servo control pin is probably 5V tolerant, but I’ve not put that theory to the test!

The servos are also separately powered from a bench power supply - I varied the voltage to test the impact on performance.