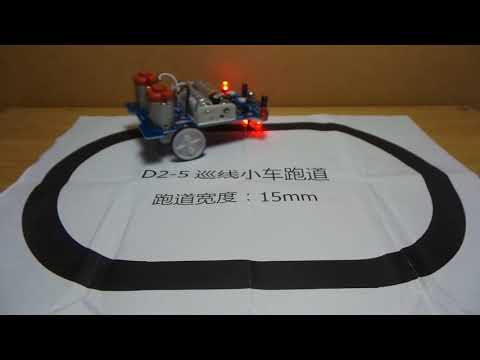 The D2-5 Intelligent Line Tracking Car Kit is widely available from the usual online sources. There are a number of variations around, but they all share the same essential control circuit.

This is a neat little example of the most basic class of Line Follower Robots. It uses LEDs and light-dependent resistors on the left and right to provide feedback to control left and right motors accordingly, with an op-amp comparator providing the “brains”.

If you know someone just getting into electronics and looking for something a little more challenging than soldering an LED blinky, then I’d recommend this kit. It’s hard to get wrong, introduces a few more components, and it’s usually available cheap enough to be a nice stocking stuffer. Most importantly - it actually works!

And once it’s working - there are endless possibilities to pimp it up with custom bodywork.

Here it is - a bag of parts, PCB and instructions and a test track on a piece of A4. The instructions are in Chinese, however the PCB silkscreen has all the details marked to build the circuit correctly, and images online help get the mechanical construction right.

If one is not carefully paying attention during construction, it is possible to end up with the LDR/LEDs pointing up in the air instead of towards the ground (literally: you made a bug instead of a robot).

The instructions and parts list is Chinese, and there’s a clear schematic provided:

There is a variation of the kit called the D2-1. I don’t have this version, but by some reports the motors (being enclosed units) are actually easier to install and align.

Here is my re-drawing of the circuit - some vendors of the kit provide a schematic, others don’t.

It’s actually a nice way to learn a bit about OpAmps and using transistors to switch loads. As it’s all running at low voltage, the circuit avoids many complexities (such as dealing with flyback currents when switching inductive loads). Some key points to note:

What happened to R3 and R4? In some versions of this circuit, these are 3.3kΩ pull-up resistors on the base of each transistor Q1, Q2. Someone obviously found out they were not really needed and saved another fraction of a cent on the BOM;-)

If you were to put this circuit on a breadboard, then like this:

The circuit was an easy solder job, with nice spacing between pads that will be fine for the less experienced.

The main tricky part of the construction is to ensure the gear wheels are correctly spaced from the board:

The axle mounts supplied with my kit were too short as-is. There were some plastic yellow rings in the kit, and I found using one as a spacer on each axle mount provided just the right height. I thought these yellow rings were axle bushings, so I’m not sure if this was their intended use or the axle mounts were actually the wrong size. Either way - it worked out.

PS: apparently the D2-1 version of the kit avoids these issues by having fully enclosed motor/gear units.

All ready to go follow lines! It just happens that with the R1, R2 potentiometers at mid-point it worked just fine the first time in my lighting conditions and with the printed test track. YMMV, and adjustment may be necessary to keep it on track or reduce some of the “hunting” back and forth.