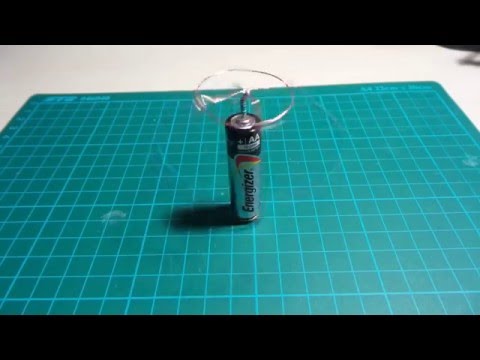 The homopolar motor was the first electrical motor to be built. Its operation was demonstrated by Michael Faraday in 1821 at the Royal Institution in London. It is also the operating principle behind railguns!

The basis of operation is pretty simple, once you understand magnitic and electric fields - which back then was really the edge of science.

The homopolar motor is driven by the Lorentz force.

The current from the battery flows through the wireframe. This intersects the magnetic field of the neodynium magents which is roughly perpendicular. The right-hand rule simplifies the understanding of the resulting force, which causes the motion.

There are lots of demonstrations that claim “free energy”. Unfortunately, there is no such thing. Electrical potential of the battery is consumed in running the motor. Although it may not seem like it at first, the wire frame actually (intermittently) completes the circuit from positive to negitive of the battery, establishing the electric field. In fact the demo video shows how easy it is to deplete a battery in such a configuration!