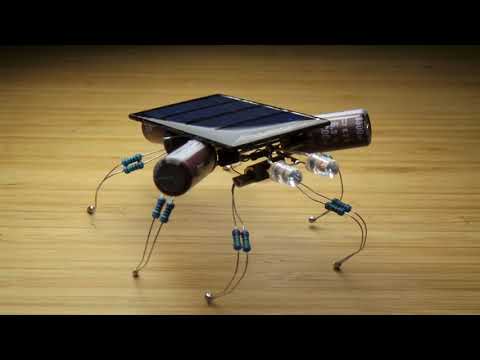 A solar-powered vibrobot is one of the more common BEAM designs: essentially using a photovoltaic cell as a power source, periodically spinning a vibrating motor (usually scavenged from a mobile phone). The motor jiggles the contraption, moving itself around a surface.

I’ve called my build Vivian, and it uses a classic FLED-based driver circuit, but I’ve added a joule thief IC to squeeze a bit more efficiency from the solar panel.

It features two flashing LED (FLED) “eyes”, and a vibrating motor from an old Nokia phone. In BEAM terminology, I guess this would be considered a Vibrobot Jumper.

FLED-based solar engines are a popular technique for driving a motor from a low-power photovoltaic source.

The flashing LED provides the oscillation necessary to allow a capacitor bank to charge to a level that is able to drive the motor.

Alternatives to the FLED circuit include those that use zener diodes or the 1381 voltage detector IC.

Vivian uses the basic FLED circuit. I have not shielded the FLEDs (they are photo-sensitive), since with the horizontal arrangement incident light affecting the FLED performance does not appear to be a major issue.

Most designs power the FLED circuit directly from a photovoltaic cell. Since I wanted to use the smallest cell possible in the build, I wanted to get the best efficiency from it.

The 30.5x58.5 cell I have is not particularly impressive in terms of voltage and power output, so it needed a little help.

I have some interesting QX5252 “solar LED driver” ICs in a TO-94 package (YX805 is a common equivalent product). These are designed to drive solar-powered lights:

Here’s a scope trace of the performance using a 330µH inductor. The effectiveness of the boost circuit is quite apparent.

There is quite a bit of useless oscillation, which can be dampened by switching up to a 2.2mH inductor (as used in the final build). In this trace:

I noticed a strange behaviour after a solar cell voltage drop-out (like when moving from heavy shade to the light): the boost circuit oscillation would not restart.

I suspect this is the chip’s over-discharge protection kicking in, but have yet to find an elegant way to defeat it. What does work to restart the boost circuit:

I have a small wire protruding from the side of Vivian - this is the “reset switch”. It is connected to ground, and a light touch will short the solar cell causing the boost circuit to restart.

First, figuring out how to combine the FELD and QX5252 boost circuits on a breadboard..

Now for the fun part - some real “dead bug” construction. I started with only a general idea of the layout and fine-tuned this while building the main circuit elements:

The main aspect not particularly obvious from the pictures is the arrangement of the FLED circuit - here’s my working sketch for how that is all connected:

This worked out quite well. I was concerned that my super-cheap solar cell was not going to be up to the job but with the QX5252 boost it performs quite well: