Using an HTML5 color picker on a web page hosted from an ESP8266 module (ESP12) to fine tune the color settings for an RGB LED. 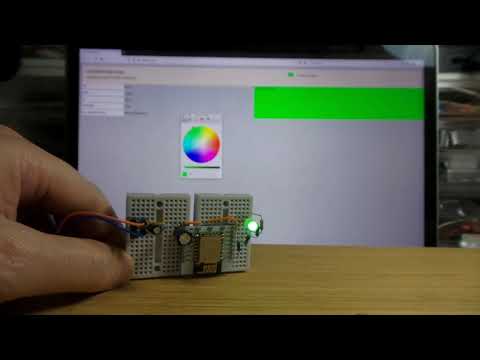 RGB LEDs contain individually driven red, green and blue LEDs in one diffuser package. The can be driven very easily with PWM to produce a range of colors.

If the exact mixed color produced is important in an application then the best way to “calibrate” the LED is to try it!

This project is a simple device based on an ESP8266 (ESP12 variant) that allows interactive control of the LED using an HTML5 color picker on a web page.

NB: the reason why I built this was to figure out the best approximation of “brown” - the answer that works best for me is rgb(22,8,0). Not what standard color theory would have predicted (something more like rgb(170,121,65)).

Since the RGB LED elements have differing forward voltages, varying the current limiting resistors is the first step to mixing colors with relatively equal intensity. BAsed on suggestions I’ve seen online, and from some trial and error, I’ve settled on the following combination as a good default:

Since I’m using a common anode RGB LED, the controlling PWM pins will actually be “sinking” current. PWM duty cycle calcuations in code take this into account by inverting the period i.e. intending to have the LED 75% “on” requires a PWM duty cycle of 25%.

The maximum current that can be drawn from a single GPIO pin is 12mA. Even when fully on, the worst case we should expect to draw is 4.9mA, so there is no problem driving the LED directly from the ESP GPIO pins i..e no need to switch via a MOSFET or BJT.

The circuit itself is very simple:

I’m using the ESP8266 core for Arduino and the Arduino IDE to program the ESP-12 module. Programming is done on the LEAP#540 DIY Dev Board.

To compile the sources, two things to remember:

I used a stand-along web page - page_design.html - for mocking up the web page, styling and Javascript. When I have it “just right”, the page content is copied into index_page.h for compilation.

The ESP8266 using mDNS to register itself on the local network. Simply browsing to http://rgb-fiddler.local/ will load the web page from the device, and then one can start controlling the LED:

The Javascript events triggered by the HTML5 color picker are intercepted, and the new values posted to the ESP8266 on each change.