The basics of programming an ESP-12 with the ESP8266 core for Arduino. 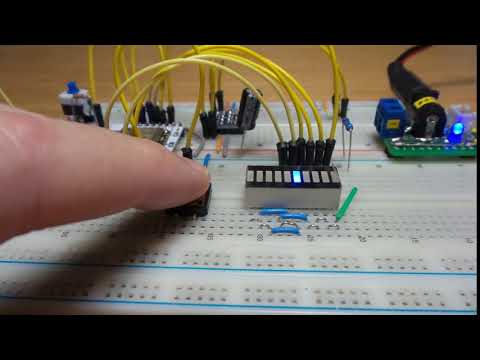 I bought some ESP-12E ESP8266 modules a while back, along with some adapter boards but they’ve been sitting in a drawer ever since. Time to crack them open!

These notes cover the basics of programming the devices with ESP8266 core for Arduino, using the Arduino IDE.

I’m using a breadboard layout with:

The ESP12Programming.ino sketch is a simple demonstration of GPIO input and output:

An LED bargraph module is used for display of the GPIO output.

Programming with ESP8266 core for Arduino

My selected settings in the Arduino IDE:

Externally (on the breadboard):

Programming mode is engaged by:

Run mode is engaged by:

Compile and push the code with the Arduino IDE: