Build and test a high-low switching circuit with relay output. It is intended for monitoring a water tank level and switching a pump. 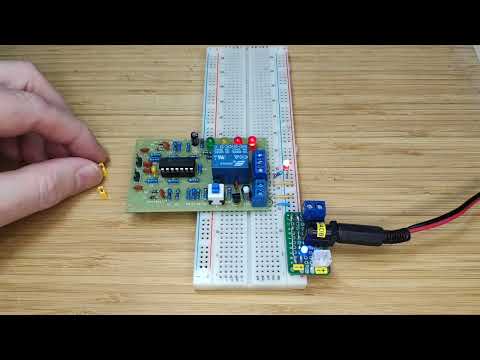 This is a simple 5V circuit in a cheap kit form that demonstrates a high-low control circuit. An LM324 is used as a comparator to evaluate two switch inputs (“low”, “high”) and trigger a relay accordingly. The relay can be used to control a compensating service (e.g. turn on a pump if low state triggered, and turn it off when high state triggered).

I don’t actually have a water tank to control; I picked this kit up just to study the circuit, but now I’m thinking there may be other applications I can put it usefully to work in.

The kit is available form aliexpress sellers for around SGD$2.90 as I write this.

There are two inputs:

The interesting trick in this circuit is how it arranges for the hysteresis effect through the “medium” state:

This is achieved with feedback from the final output opamp unit LM324d(pin14) to its non-inverting input (pin12) i.e.:

Note: LM324a, the first opamp unit, is configured as a square wave oscillator running at about 710Hz. This provides the AC signal switched via J1 and J2 to pull their respective LM324 opamp units high via the DC-blocking capacitors. See the signal trace, tapped at pin 1 of the LM324:

Here is my redraw of the schematic and a possible breadboard layout:

I don’t actually have a water tank to monitor, so I did a quick simulation and test on a breadboard: