Comparing BJT and MOSFETs for creating a simple turn-off delay with discrete components. 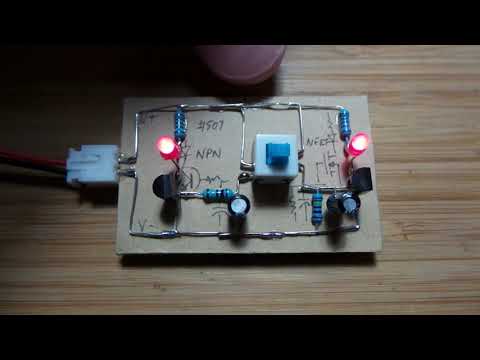 Adding an RC timing component to a single-stage low-side control circuit is a simple way of creating a “turn off delay”.

The delay is proportional to the RC time constant, but the actual behaviour is quite different depending on whether an NPN BJT or n-channel MOSFET is used as the active control component.

In both cases, a capacitor is charged during the “on” period. When power is disconnected (switch off):

I was inspired to whip up a quick demonstration after seeing learnelectronics’s “How to make a simple delay circuit” video: 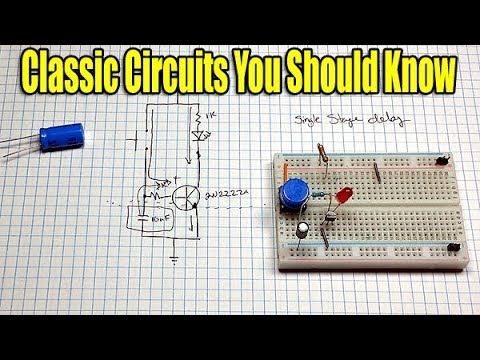 To compare the BJT and MOSFET behaviour, I put both on a breadboard, triggered by a DPDT switch. I used an 2N3904 NPN transistor, and a 2N7000 n-FET, though the parts selection is not critical.

For visually testing the circuit, the delay is set rather slow with R=1MΩ and C=1µF, for a time constant of 1s.

Actually on a breadboard:

To capture behaviour with an oscilloscope, I switched to R=10kΩ and C=1µF for a time constant of 10ms.

In the following trace, the channels are all offset by -2V and set for 1V/division. Channels are assigned:

I felt like flowing some solder, so made the circuit permanent in a very literal transposition of the circuit to a freeform build mounted on a bit of cardboard: