Investigating a single-digit counter with configurable range and frequency built with 74HC192, CD4011 and CD4511 logic. 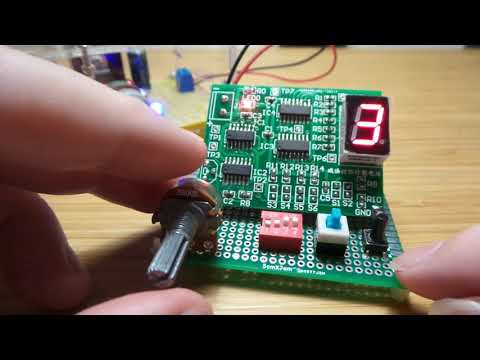 Another cheap kit somehow found itself in my shopping cart(!) - this time a “Subtraction Loop Counter” featuring the 74HC192 Decade Counter.

First, a review of the ICs involved..

The CD4011 quad 2-Input NAND gate is used for three purposes in the circuit:

The CD4511 is a BCD-to-7 Segment Latch/Decoder/Driver. Some key points:

The 74HC192 Decade Up/Down Counter with Clear. Some key points:

Here’s my re-drawing of the circuit..

So, what is going on here?

Four CD4011 NAND gates are used to implement a Schmitt oscillator providing the master clock for the circuit, similar to that used in LEAP#465 MrBiJuT. It includes a couple of tricks though:

The buffered & enabled clock output (CLK) feeds the count down pin (CPD) of the 74HC192. A few features of the 74HC192 are unused: count up; terminal count up and down.

The 74HC192 master reset can be toggled with switch (jumper) S2.

At this point, we have a free-running countdown timer (9-0) running at the frequency set by RP1.

Individual 560Ω currently limiting resistors are used for each segment of the display.

Finally, there’s some fun and games going on with the Parallel Load logic.

A flag (PSET) is set if a manually preset has been entered on the switches:

A flag (IS9) is set if ‘9’ is currently being output on the 7-segment display:

The PSET and IS9 signals are fed to a final NAND gate:

So the nett effect: the switches S3-S6 can be used to set the number 0-9 from which the countdown will start.

Sprucing Up the Build

I decided to replace the jumpers and variable resistor with some off-board components for an easier to use unit:

Some things that didn’t go so well!

I started soldering the board with a hot air station, however this didn’t work so well as the PCB footprints for the ICs are not quite the right size - they are a little too wide so the IC feet barely touch the pads. Reverting to chisel tip iron and I made quick work of it.

The async parallel load inputs (P0-P3) are in LSB-first (on the left) order on the PCB. When I connected these to DIP switches, I didn’t think to re-orient the package so they could be entered in the most natural form: MSB-first with bit “on” oriented upwards. As it is, I need to enter the P* digits in reverse and upside down!