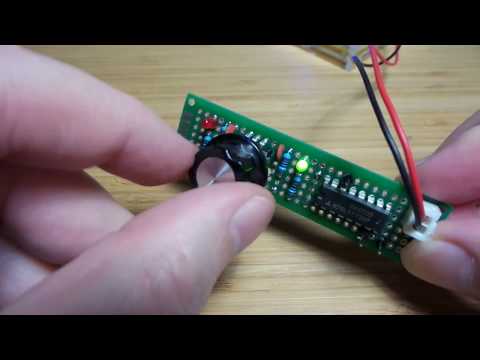 LEAP#118 RotaryEncoderMethods demonstrates various ways of using a rotary encoder with an Arduino, but I’m inspired to throw away the microcontroller for a more basic demonstration after reading Experiment 101: Rotary Encoders from ARRL Hands-on Radio (Vol 2).

This project demonstrates a forward/reverse LED indicator using simple digital logic and a mini rotary encoder (from seller on aliexpress).

Key thing to note from the quadrature diagram:

on the edge of one output from the rotary encoder, the level of the other output will indicate whether rotation is forward or reverse

This insight is used by Experiment 101: Rotary Encoders, where one signal is considered a clock source and the other the data to be latched with a CD4013 D-type flip-flop. The output controls a “forward” LED, and the complementary output drives the “reverse” LED.

I don’t have any CD4013 on hand, so modified the idea to work with 74LS173. The 74LS173 is a 4 bit D latch and doesn’t have complementary outputs, so in this design it uses two of the D latches - one configured to drive the “forward” indicator, the other for the “reverse”. The 74LS173 can source/sink enough current to drive and LED at under 5mA in either direction.

The 74LS173 clocks on the rising edge

There are may other ways of achieving this. For example one other alternative I scoped out was using a 74LS73 JK Flip-flop and an inverter.

I tested this out on a breadboard first. The 100nF capacitors coupled with the 10kΩ pullup resistors on the A/B rotary encoder connections are for hardware de-bouncing.

But then decided to capture the circuit on protoboard using this layout:

I added pin headers to the protoboard to assist capturing signals with a scope. Here are some traces where:

Here’s a clockwise (CW) rotation capture. Note the effectiveness of the hardware de-bouncing - quite clean transitions.