Rainbow glow effects with an RGB LED and OpAmp oscillators. 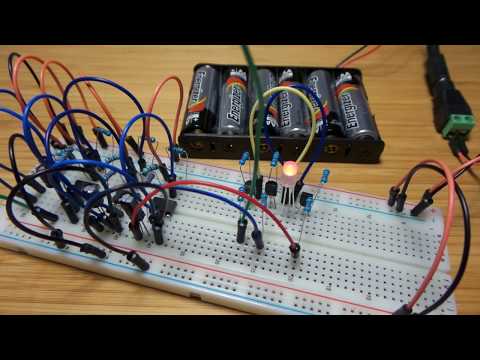 For a while I’ve been thinking of ways to generate a pseudo-random rainbow glow on a composite RBG LED. In particular, by avoiding just throwing a microprocessor at the problem!

First, I want a waveform that has a smooth rise and fall in intensity, including being off for a period. Second, the reg, green, blue waves should not be synchronised, so the effect is an infinite colour palette.

The RGB LEDs I have are common anode:

Basically, these are just three LED dies in the one package.

I borrowed the basic idea from LEAP#089 BreatheLamp, and adjusted the components for best effect.

A common reference volage sets the feedback offset. This is adjustable, the effect being to shift the waveforms with respect to the required LED control levels (meaning the LEDs stay on for longer of shorter periods).

The LEDs are configured with a low-side PNP control and current-limiting resistors. This puts the linear region of the transistors in the general vacinity of the triangle waveforms.

After some experimentation, I discovered I could get a much more peasing “glow” effect by reversing the PNP driver transistors (i.e. swap Collector and Emitter). The current flow is reduced, which can be offset by also reducing the current-limiting resistors. But it does expand the (pseudo-)linear region to cover the entire triangle wave sweep. This is a bit of a hack, and could probably be better achieved by ensuring the driving triangle wave is amplified and offset precisely to bias the transistors appropriately.

The schematic shows the alternative arrangements. The demo video is using the reversed-PNP arrangement.