Use an Arduino to demonstrate a basic 74LS75 Quad Latch driver circuit, and plot the results with Processing. 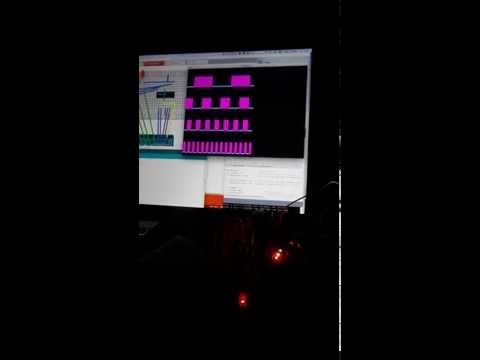 The 74LS75 Quad Latch is a 4-bit bistable latch from the 7400 series of TTL integrated circuits.

This circuit demonstrates the basic operation. It uses the Arduino to latch a data series to the 4 input pins (D1-D4), while sampling the 4 output bits Q1-4. The 7475 also handily offers inverted output pins, but they are not used here.

It is possible to separately latch bits 1-2 and 3-4, but for simplicty this circuit latches all bits at once (with pins 4 and 13 in tandem).

The trace is generated with PlotNValues (a simple Processing sketch). It reads the data from the serial port and plots the input and output value over time, with some coloration effects thrown in for good measure. In other words, we’re using Arduino and Processing as a basic oscilloscope! And it kind of works, mainly because the frequency is so low.

The circuit uses a digital output pins to sequence inputs to D1-4 and latch the value. Four analog input pins are used to sample the latched output Q1-4, with the values is echoed to the Arduino serial port.