A dual-LED glowing oscillator from a 1.5V supply 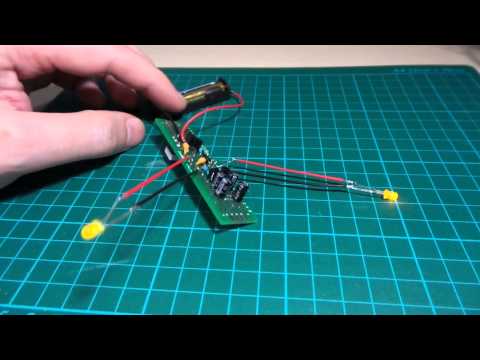 So for another project I wanted some “glowing” LEDs, ideally powered from a single 1.5V AA or AAA battery. That seemed like an interesting challenge, especially when the forward voltage of the LEDs I’m using is about 2.1V.

I had a feeling I could cobble together a couple of ideas from other projects to get something going:

And it works! I’ve made a couple of modifications to the circuit along the way to get the result I wanted:

This is based on the LEAP#129 RelaxationJouleThief circuit.

I’ve added a diode on the output to prevent any of the negative voltage swings passing through. I used a 1N5819 because it has very low forward voltage drop. A 1N4148 also works. A small 100nF capacitor provides some high frequency smoothing. Putting too large a capacitor on the output actually interferes with the oscillator that follows.

The circuit exhibits quite a bit of instabiity on a breadboard, no doubt due to all the stray capacitance, inductance and just plain dodgy connections.

But on a PCB or protoboard and with a fixed load, the circuit delivers a beautifully stable ramp-wave. Of course what the supply can deliver varies completely with load.

Here’s the power supply as built on a protoboard:

The LEAP#049 BJT RC Oscillator circuit oscillates between two LED outputs. But it is a harsh transition. I really wanted two LEDS that oscillated in a much gentler fashion - “glowing” on and off.

First step was just to get the basic oscillator working with the boost supply. Parts are a little bit critical.

The transistors need to be reasonable well matched to get the oscillation going and balanced. S9013 were the first I grabbed that worked. Note these are different than the 2N3904’s I used in the power stage, but I did go back and verify that some 2N3904’s also worked in the oscillator.

R3/R4 and C3/C4 determine the basic oscillator frequency, but the theoretical frequency is counfounded by the load-dependent power supply. So I needed to just play around with some values

Here’s the scope trace of the basic oscillator without C5/C6 installed.

After a bit of experimentation, I came up with a configuration of 22µF capacitors C5/C6 across the base-collector of the transistors. This drammatically smooths out the oscillator transitions.

The values of capacitors C5/C6 need to be « C3/C4, otherwise they will kill the oscillation. Also note the orientation of the capacitors in the oscillator. I’m using electrolytics, and the orientations in the schematic are correct in this configuration to ensure they are driven with correct polarity.

Now I’m quite happy with the result and committed to component values, I transfered the the circuit to protoboard for the project I really wanted this for in the first place!

This is the protoboard layout: