A DIY 4-channel foot switch with tri-colour LEDs suitable for use with a microcontroller. 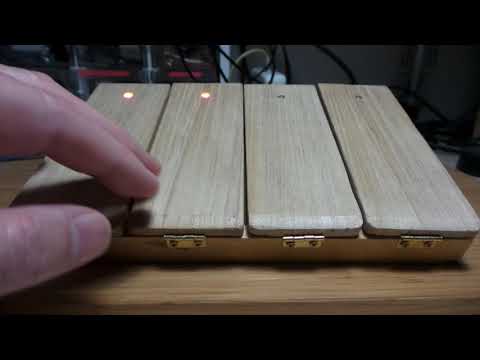 I’m planning some projects where I’d like to use foot switch input, so I thought I’d fashion a device that was flexible enough for reuse.

The RGB LEDs are capabable of complex colour mixing if used with independent PWM on each RGB colour, however for this application I plan to use each LED to indicate 4 states (red - green - blue - off).

I chose LED control with two 74HC595s for a couple of reasons:

Note that since the LEDs I have are common anode, registers operate with active low logic.

The register mapping for my particular wiring scheme:

Each pedal has a tactile limit microswitch with an additional compression spring to prevent overworking of the switch.

Switches are wired with a pull-down resistor, and pull the output high when depressed. I haven’t added any debouncing on the switches (yet), as seems adequately handled in hardware. A ~100nF in parallel with the pull-down resistor would probably be my first choice if I find spurious activations becoming a problem.

Showing the wiring of the LEDs and switches. The naming convention I’ve used for the hardware and code is that the LED and switch modules are numbered left to right from 0 to 3.

Installing the pedals and swithes. The hinges turned out to be a bit cheap and nasty and it took a few experiments to find an orientation that would allow the pedals to press completely down.

The switch and LED circuitry is on a small piece of protoboard with a pin header for simple attachmentto a microcontroller. All installed:

The FootSwitch.ino sketch is an example of how to use the foot switch:

The code does a very simplistic scan of the switch state. There are better approaches for a real project, such as using the EnableInterrupt library to attach pin change interrupts on each pin.