The Goblin is what I’m calling my remake of the classic Ibanez Tube Screamer 808, after researching how the circuit works and common modifications. 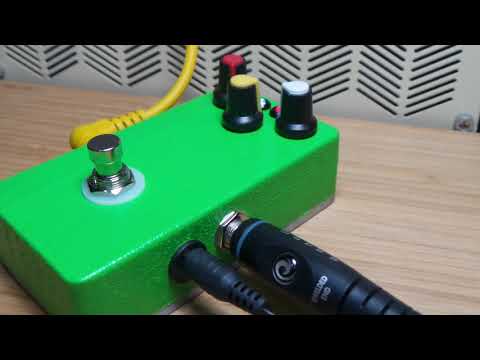 I remember lusting after an Ibanez Tube Screamer back in the day - they really were the stuff of legend. The most famous is perhaps the TS-808.

General Guitar Gadgets have been offering a replica of the Tube Screamer 808 as a kit: the ITS8. I haven’t built that kit yet, as first I wanted to study and breadboard the circuit.

A number of folks have redrawn the original schematic. Here’s a pretty complete and (I think) accurate one by Steve Cerutti:

The circuit breaks down into a number of stages/sub-systems:

Zf is the parallel combination of the clipping diodes, capacitor and drive-control resistors

The tone control is a high pass RC filter with a roll-off at 1/(2πRC) = 3.29kHz. Depending on the tone pot position, this either affects:

Uses the second JRC4558 op-amp as a non-inverting buffer.

Volume control is a conventional arrangement of 100kΩ pot that progressively shunts the output to AC ground.

Can this be filed as “unnecessarily over-engineered”?

The original design uses a discrete JFET flip-flop circuit to switch the clipping and tone/volume stages in or out of the signal path, leaving the input and output buffer stages in circuit. Most variants or remakes of the Tube Screamer replace this with true bypass switching.

Similar to the input buffer, another emitter follower with a 10K emitter resistor, and 510kΩ bias from the AC ground.

The output from the emitter is tapped with a series resistor and 10µF coupling capacitor, then a shunt resistor to ground. The values of these resistors is one of the main differences between Tuber Screamer models.

The circuit expects a 9V supply and uses a voltage divider with smoothing capacitor to establish an AC ground at ~4.5V. Conventional power supply arrangements may be used, but not shown completely in the schematic:

The following summarises some of the common modification possibilities. More are covered in The Technology of the Tube Screamer.

Original used the JRC4558. It was originally chosen for non-aesthetic reasons (cheap and available!), but it’s particular role in shaping and texturing the output remains very subjective.

Some possible replacements, either for availability or aesthetic reasons, include:

Some variations include an additional 1.5MΩ shunt resistor in front of the input buffer. I think this is mainly to boost input impedance which may be useful for more modern pickups. I haven’t included it in my build, as it appears to make no difference with the guitars I have tried with the pedal.

The original circuit has pronounced mid range boost that increases as the drive control is turned up. Improving bass response is a common goal of modifications, including:

The frequency response is largely determined by the equivalent impedance to ground in the clipping amp. The factory components (4.7KΩ resistor and 0.047µF capacitor) form a high pass filter with corner frequency of 1/(2πRC) = 720Hz.

Keeley have produced a number of effects based on Tube Screamer designs (though it appears none on offer at the moment). It appears that some of the modifications made include the following:

The circuit works quite well on a breadboard (although it does pickup quite a bit of noise). I used this to evaluate various modifications, but ultimately decided to go with a very stock version of the circuit with just a couple of component changes when compared to the original Tube Screamer circuit, namely:

Since the circuit was working well, I transferred to a protoboard build and mounted it in a 1590B effect pedal case. The end result is excellent. When mounted in a case, the effect has low-noise and works just like the real thing.

Here are my notes on the layout I used:

Close-up of the completed protoboard:

Final test before putting in the enclosure:

All the components ready to install after giving the enclosure a stippled-green point job: