A decade box is an old-fashioned bit of test equipment, allowing an arbitrary resistance to be dialed up to order. 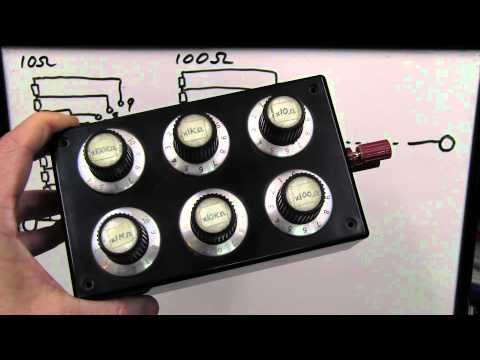 The pushwheel switches come as individual single-digit units that snap together. These are decade units with a common pole switching to one of 10 output pins. BCD versions are also available (these could be used, but require a somewhat more complicated resistor configuration to make a decade box).

With 10-throw switches, construction is trivial:

Assembled as a 7-digit bank:

And finally encased in a traansparent case (a Ferrero Rocher box iirc) with a terminal block for connectivity:

I’ve not aimed for extreme accuracy in this build - only using 5% resistors as that’s what I had on-hand. But the results are quite agreeable - generally -2% to -4% across most of the range.

I’ve tabulated a selection of readings in this Google Sheet. Measurements were taken with a cheap digital multi-meter (which may have its own accuracy challenges).