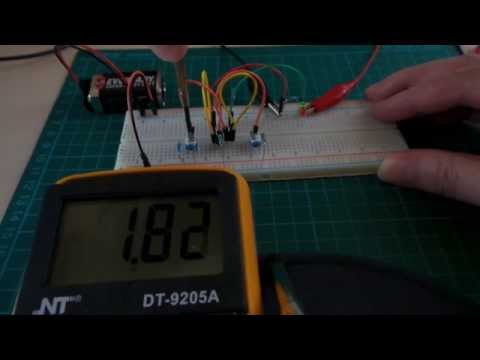 Differential amplifiers are excellently described in w2aew’s tutorial on YouTube.

This is a build and test of the basic long-tail circuit with no frills, which means the circuit is not ideal because:

The circuit includes an LED pair and resistor load between the outputs. This provides red/green - left/right balance indicator.

What is immediately noted is that gain varies wildly given different input voltages, from approaching 0 at large voltage differences (clipped by the circuit I believe), to 10-100 for small variations.

There are two improvements suggested by w2aew that will bring this circuit closer to an OpAmp:

I’ll try these improvements in another project file.

Monitoring with an Arduino

The Arduino program is used to monitor the input and output voltages, calculate the differentials and gain. Readings are made using 1MΩ voltage dividers, to limit impact on the circuit and to scale the voltages to the 5V range supported by the Arduino analog input pins.

Although not particularly accurate, it gives a rough indication of behaviour. For example: