Learning how to use Boldport PCBmodE design software with an example of making a simple 555 timer LED blinky PCB.

I’ve long been aware that Saar uses his own EDA software called PCBmodE for all the Boldport designs. It is open source but this is the first time I’ve made a serious effort to learn how it works and try to build a PCB with it.

The following are my notes on getting up and running with PCBmodE, culminating in the design of a new board based on a simple 555 timer circuit.

See the setup docs. I have a Mac with all the pre-requisites already installed, so I just needed to clone the PCBmodE repo and run setup (in a dedicated Python 2.7 virtual environment)..

I’m running all my PCBmodE experiments from this folder. It has the following structure:

Compiling an Example Board: widlar

Boldport publish all the project design files. I’ve chosen the widlar project for a quick test:

This generates gerber files in a default boards/widlar/build/production folder:

I zipped up the production folder and uploaded to a randomly chosen viewer - www.gerber-viewer.com - and it renders thus:

I tried uploading the default production files to OSHPark only to discover they don’t match the required Naming Patterns.

A quick look at the source, discovered there’s an ‘oshpark’ fab option. Let’s try that:

This generates gerber files in the boards/widlar/build/production folder:

These uploaded to OSHpark without issue - you can see the generated project here.

I learned (the hard way) that if you don’t read the workflow docs, then figuring out why and how to use PCBmodE will be a trial of massive fail. It is nothing like any other EDA tool I’ve ever come across!

In essence, design is an iterative processes shuttling between the JSON definitions and the SVG representation:

When the design is “ready”, generate production files using PCBmodE (pcbmode -b board --fab).

NB: the hello-solder tutorial mentioned in the docs appears to need some updating to be compatible with the current PCBmodE software. In particular, it seems the shapes structure out-dated.

I decided to use PCBmodEZero in generate_blinky.py to generate an initial placement of components.

The script generates an initial board definition and SVG in board/blinky. This worked pretty well, although I was unable to get it to generate routing with connect_pins.

To finalise the board, I used the standard hand-crafted PCBmodE flow:

After a few iterations, I had a design that was at least electrically complete and demonstrates a few of the boldport hallmarks such as wiggly traces and irregular outlines:

I shopped around the various PCB houses, and it turns out that OSHpark is happily the cheapest for this order (due to free shipping).

Generating the production files for OSHpark:

After checking the board in the gerber viewer and double-checking the circuit, I’ve put my order in. The project can be found here on OSHpark.

UPDATE: the boards have arrived thanks to some speedy shipping from OSHPark. Electrically, they check out perfectly..

I built all three of the boards and decided to mount them on a little wire sculpture and a 9V battery adapter.

The actual components I used:

Here’s a quick demo of the boards in action.. 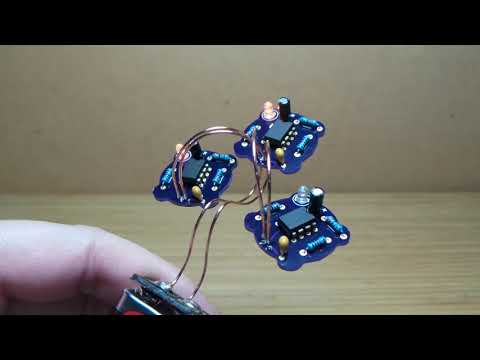 Well, my first PCBmodE boards turned out just fine, at least I was able to produce something that works - hardly an expert yet. Some observations on the PCBmodE design process so far:

With small boards, the process gets you up and personal with the intricacies of the board design - which is great if one is trying to produce something startling and unique. I don’t know how I’d go with much larger designs without added tool help.

So far my bottom line: this is a really liberating way to build boards, especially when you want to get creative. I can’t help thinking that improvements in tooling (especially WYSIWYG component selection and automated feedback of design changes) would make for something really powerful that I’d want to use for even regular designs.

More comments perhaps once I’ve done another design or two..