BINCO is a little up or down “fidget” counter, Project #19 of the Boldport Club.

The BINCO a binary counter that can be configured to count up or down. It uses Snaptron domes as buttons (on, slow/fast and reset). The heart of the counter is a 555 timer driving a 74HC4020D 14-bit Binary Counter from which 11 taps drive some nice reverse-mount LEDs.

The 555 timer is in an astable configuration, initially disabled.

The timer provides the clock pulse to the 74HC4020D 14-bit Binary Counter. The 74HC4020D provides 12 taps of a ripple-carry chain, but the first (pin 9) is not used, probably because the chip doesn’t provide pins for the next two stages.

As always, Boldport provides a very nice infographic for the project, but here is my re-drawing of the circuit (it’s how I make sure I understand what is going on!)

I decided to build the “count down” configuration, which involves making sure the LEDs point to the edge of the board, and bridging the down/right count pad.

In this configuration, R101 and IC10 are optional, so I left them off the board. 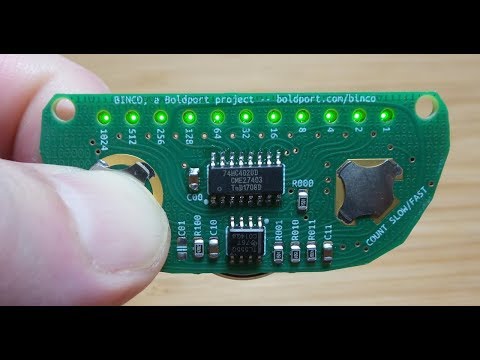