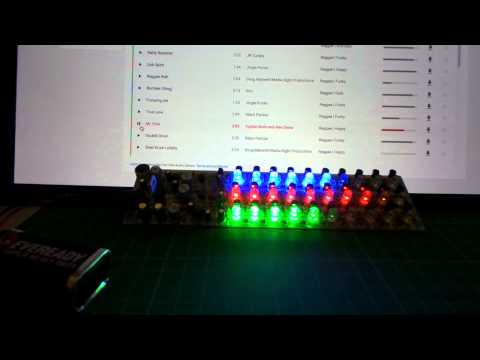 I was inspired to build this kit by Julian Ilett’s tutorial with a similar kit - a great basic soldering instructional if nothing else.

The kit is quite a common item on ebay, bang-good, aliexpress - all the usual sites.

Soldering the kit together is quite therapeutic, and the end result is pretty decent. However there seem to be a couple of issues that could be improved:

Should I try an improved circuit? Perhaps .. a project to save for another rainy day.

The circuit breaks down into 4 basic modules:

The input voltage of 8.5-15V is regulated down to a stable 6V by an L7806CV regulator. A 1n4007 diode provides reverse voltage protection, and chunky 220µF caps provide smoothing before and after the regulator.

My kit was missing the 1n4007. No biggy as I had some on hand (plus a umber of other components were supplied in excess. Rather than use the JST connectors provided, I replaced the power connector with a barrel jack. Since this makes reverse polarity connection extremely unlikely, I probably could have just skipped the 1n4007 and shorted the connection instead.

Audio input is captured with an electret microphone and amplified in two stages with S9013 PNP transistors. A 50kΩ pot provides master gain control for the second stage

The amplified audio is presented to 3 filter/LED driver chains. Each filter is tuned for a specific pass-band, and has a 50kΩ pot for individual level control.

The filters seemed a bit unbalanced and it’s a little touchy to trim the individual pots for a given input level.

Taking a closer look at the filter circuits, each is a combination of two RC filters and NPN transistor to bother selectively pass frequencies and also amplify the signal. That’s a bit too complex for my entry level RC filter analysis skills, so I modeled the filters in this CircuitLab project.

If I can trust the CircuitLab frequency analysis, things do look a bit out of whack and this matches observations of the circuit:

Each diode drives the base of an S9012 PNP transistor through resistor, the value of which is scaled to the voltage of the stage to hopefully drive it in the active region. The S9012 drives an LED paired with a 560Ω current-limiting resistor.

However, the circuit seems to be getting a bit tricky here, as the diodes are actually driven way down the IV curve where in practice the peak forward voltage measures in the region of 0.38V. That’s off the graph in most data sheets, and one would expect this makes the circuit quite susceptible to individual variations in the diodes. But obviously works .. at least to a degree - I’ve never seen the 10th LED light up so far.