Reviving a design from Elektor in 1980, with light and touch-sensor variations. The circuit must have been used in BEAM robots back in the day, so my final build is a freeform phototrope squawker. 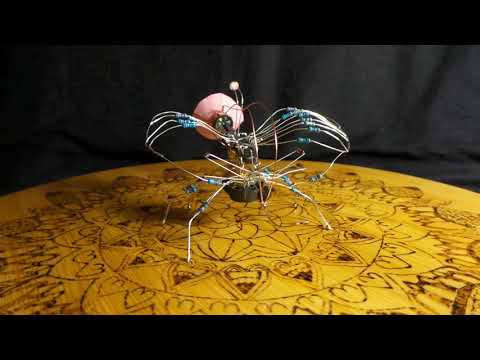 The original “Simple Sound Effects” circuit is a clever use of the (at the time) new CMOS technology - a CD4040 12-Stage Ripple Counter, and CD4049 inverter.

Here’s a basic description of how it works:

The resulting sound produced continually cycles through a number of modulation frequencies.

Here’s a scope trace to illustrate the behaviour. For this test, the CD4040 reset is pulled high, so only one counter stage is operating to simplify things.

This is showing the lowest oscillator frequency is around 22Hz. The subsequent counter stages will multiply this.

The “Greater Simple Sound Effects” circuit published in Elektor May 1980 used another 4 counter stages (unused in the original design) to drive another transistor control voltage input to the oscillator.

Specifically, this added R10-R14 and Q2 (see schematic below).

The resulting sound effect is similar but more complex and seemingly randomised.

After building the basic circuit on a breadboard and verifying its operation, I did a little experimenting and settled on a few variations for my final circuit:

I’ve been able to run the circuit quite satisfactorily from CR2032 3V coin cell, at the very bottom of (and below) recommended voltages:

The circuit schematic and breadboard layout, including all the variations listed above:

Here’s a quick demo. I test a few things in the clip: 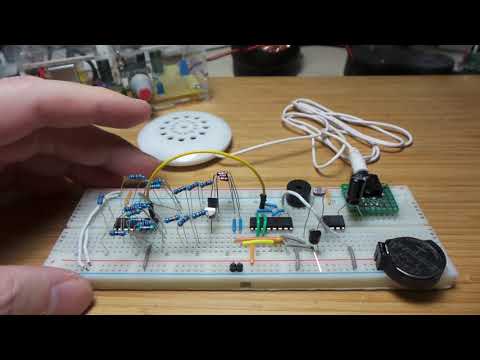 The circuit must have been used in BEAM robots back in the day, so for this revival I decided to build a freeform “phototrope squawker”.

There was no grand design - it evolved in an ad-hoc manner as I put together the main subsystems:

The final result: some kind of robotic insect!