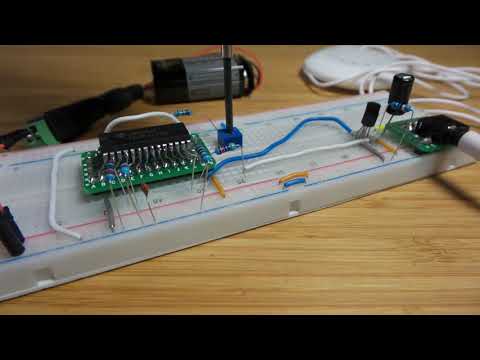 The Texas Instruments SN76477 is a complex sound generator chip from the late 1970’s and still reasonably easy to find as refurb or new-old stock. It was covered in some detail in Elektor Magazine 1981-03, p3-22 - “Multiple Sound Effects Generator”.

It was apparently widely used in arcade games and synthesizers and does its magic by integrating a number of subsystems:

Features are variously enabled/controlled via pins with either:

The data sheet describes the configuration for a number of specific sound effects, including:

As a first simple demonstration, I’ve put the “propellor plane” on a breadboard below.

The pin and row spacing is not compatible with a breadboard so I whipped up a simple adapter with some protoboard. I didn’t go full dead bug, as I wanted to keep the pin assignments in conventional arrangement.

This is the “propeller plane” configuration described in the data sheet.

The “speed” of the engine is controlled with a variable resistor input to the low frequency oscillator on pin 20.