Adding a low-voltage BJT class A amplifier for the HS088 Audio Effects Chip. 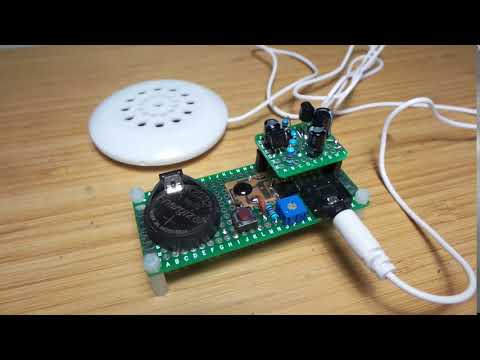 The HS088 audio effects chip encodes a “ding dong” wave, but like many effects chips it cannot drive a speaker particularly well in its default circuit configuration.

Adding an LM386 is a very simply way to provide amplification, but that requires a power supply of 4-5 volts. But I was interested to explore circuit ideas for providing decent amplification at lower voltages - specifically with a 3V CR2032 coin cell.

There are other amplifier-on-a-chip options that work at these voltage levels (such as the TDA2822), but first I decided to try a descrete BJT design.

My first test was with a simple single-stage common-emitter design (R1=6.8kΩ, R2=4.7kΩ, Rc=50Ω, Re=10Ω with 47µF bypass - designed for Icq=40mA). Unloaded, it achieved excellent amplification, but proved to be very poor at power transfer to the speaker.

Adding a push-pull output stage started to produce some more decent results with an 8Ω speaker. The final circuit described below is an adaptation of a design from deeptronic that was in turn inspired by a design from Bowden’s.

After verifying component values on a breadboard, I but the amplifier circuit on a small piece of protoboard.

I’ve taking some measurements of the amplifier performance with a 1kHz sine wave and 3V power supply.

Adjusting the input attenuation for the sweet spot for minimum distortion, gain is around 19.

About 40mV is the largest input signal that can be handed before the output starts clipping. The output is quite distorted at this point though.

The circuit is completely overdriven with a 400mV input. The output is essentially a square wave at this point!

Finally, putting it all together. First, as always, verify on a breadboard:

I used another strip of protoboard as the mainboard to mount the:

The final build, with volume adjusted for maximum output without distortion procudes an amplified output that is perhaps 3x the apparent volume of the unamplified HS088 module. I don’t have an SPL meter to verify this with a measurement (yet).