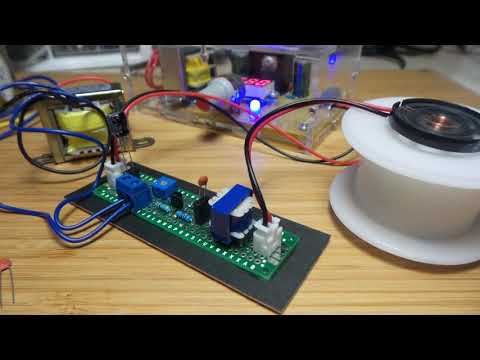 The Parrot is a reproduction of a “bird chirp” circuit from brighthubengineering.com.

I discovered this in an interesting collection of bird-tone generator circuits that Kelly Heaton had been experimenting with. Kelly Heaton was one of the winners of the Hackaday Circuit Sculpture contest with a wonderful bird sculture (that’s how I found her work).

I redrew the basic schematic here in EasyEDA.

I initially built this on a breadboard to prove the circuit and experiment with component values. A wide range of values are possible, but I specifically tested with the following values:

NB: the components marked with a (*) are the ones most useful to change in order to achieve different effects.

The L1/C1/R1 resonant circuit acts like a “spring” on the base on the PNP, which is biased with R2:R4.

The collector is coupled to effectively a a tank circuit comprising C3 and the audio transformer, with feedback to the base of the transistor via C2 and R3.

The effect of these components on the sound can be summarised in general terms:

Also, the circuit is voltage dependant, so adjusting the supply voltage will affect the sounds produced.

The result is a series of “chirps”..

I put the circuit on a protoboard strip with some variations:

A wide range of “chirp” effects are possible. Here are some of the component values/ranges I’ve used successfully.