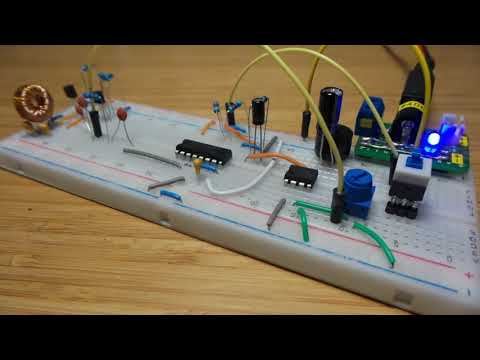 I’m planning an upcoming project where I would like a “jet engine startup” sound effect. Of course, these days just playing back an audio recording from an SD card is cheap, easy, and just like the real thing.

But where’s the challenge in that! Surely a reasonable simulation could be achieved with some simple electronics? My web searches didn’t turn up much in the way of prior art however, with many circuits actually turning out to be various applications of the Holtek HT2844P sound effect chip (that included a jet engine sound). Holtek is an interesting Taiwanese IC design house that still produces a line of flash and MCU-based voice and music effects chips, but the HT2844P appears to even pre-date their EOL notification list. I can’t even find the HT2844P in the refurb markets.

I had a feeling I could get a reasonable simulation of a jet engine by mixing a noise source with a carrier wave, with the frequency of the carrier rising to give a feeling of the engine spinning up to speed.

For the noise source, I’m using a reverse biased NPN transistor in zener mode breakdown - based on the same idea I tested in LEAP#140 ZenerModeEffects.

I played around with this on a breadboard for a while to get a result I’m pretty happy with. I also tried a little simulation of the sound effect with Pure Data: see engine_simulation.pd, though this is too clean as it is.

Some of the key decisions I made as a result of experimentation:

I was prepared to add some more distortion effects either to the final signal, or to the carrier before mixing, but I don’t think this is necessary. The fact I’m using a piezo buzzer instead of an audio speaker adds enough “desirable” distortion already. I did actually start with an 8Ω speaker, but switched to the piezo speaker because in the final application, I expect to squeeze this circuit into the smallest possible space.

To set the min and max frequencies of the CD4046 VCO, a “rule of thumb” estimate is 2 x time constant:

The noise generator requires a minimum of 9V to trigger the breakdown. It seems most happy and produced the best results from 9-9.5V, and the complete circuit only consumes about 21mA i.e. ~190mW

Some points to note about the schematic: