A wireless doorbell based on an Arii (Microace) Yatai Ramen model with added lights and sound. 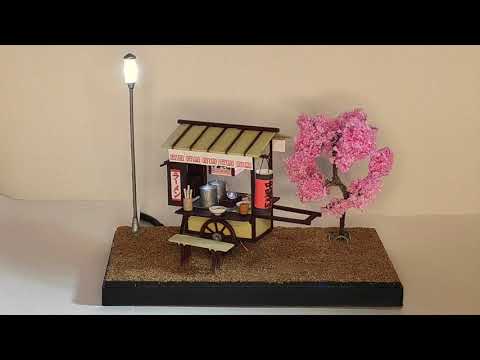 I found a cute Yatai Ramen model on sale while browsing Plaza Japan. It was originally an Arii kit, but apparently the company was later subsumed by Microace. I have no idea if this kit is still in production, although it is still available for sale at some outlets.

My plan is to turn it into a door bell with appropriate sounds and lights.

The kit is pretty crude - lots of flash and not much detail. I cleaned it up and thinned some of the mouldings e.g. ramen bowls should not be the equivalent of ~2cm thick!

The lamp post was a single plastic moulding, which I converted to hold some LEDs.

The cart has LEDs installed:

The tree provided was quite pitiful, so it got stripped, rewired, and re-foliaged as sakura in full bloom (using a minced pink dishwashing sponge).

The Ramen stall is mounted on a base with built-in electronics for:

I’m using a common (LPD433) 433 Mhz RF Transmitter and Receiver Module from aliexpress. With antennas attached, it has reliable performance from one end of my apartment to another.

Under Arduino control, it can handle an encoded transmission. The encoding will hopefully eliminate cross-talk and false triggers from other 433 MHz devices.

The receiver is designed to operate at 5V. I have added the 32cm external antenna:

The transmitter can operate from 3.5-12V:

The remote doorbell is triggered with a push button that turns on the battery power via Q1 p-channel MOSFET and holds it while C1 discharges. C1 is selected to provide enough time for the Nano to boot and assert power via Q2.

The transmitter uses the RadioHead library to send a series of ASK-encoded messages (repeated to make sure at least one gets through) and then shuts down by pulling Q2 low.

Code for the transmitter is in Transmitter/Transmitter.ino.

My notes on the protoboard layout I used:

The receiver uses the RadioHead library to listen for transmissions from the bell switch. When triggered, the code:

Note that the RH_ASK and TMRpcm libraries both use Timer 1 by default, and this cannot be changed without modifying the library source code. The sketch avoids the conflict by re-initializing the RH_ASK driver after the sound has played.

Code for the receiver is in Receiver/Receiver.ino.

Testing transmitter and receiver on breadboards:

Installed in the base of the kit:

My notes on the protoboard layout I used:

Works pretty well, however the audio volume is a bit low (even with the LM386 wired for maximum 200x amplification). I’d like to look at some ways to improve that.