Building the Airfix 1:72 Hawker Typhoon Mk.Ib, electrifying it with an engine and rocket effects and displaying it with a ground attack vignette. 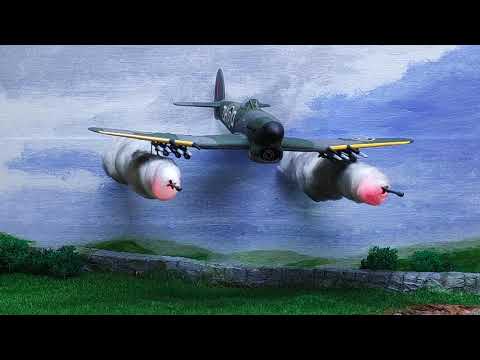 The Hawker Typhoon was originally intended as a replacement for the Hawker Hurricane (which didn’t really pan out), but it later became one of the Second World War’s most successful ground-attack aircraft.

After electrifying a Harrier GR.1 in LEAP#558, I was inspired to try some more tricks to pack in some electronics into a 1:72 scale aircraft. One of the first ideas that came to mind was to try and reproduce the iconic image of a Typhoon on ground attack with rockets over Europe.

I picked up the Medium Starter Set - Hawker Typhoon Mk.Ib A55208 from local supplier Hobby Bounties and have been slowly working away over a couple of months.

What follows are my notes from the build, including full schematics…

Hawker Typhoon Mk.Ib A55208 kit from Airfix is a new tool (2013) and packaged as a starter set with Humbrol paints, brushes and glue.

The kit is designed to have a free spinning propeller, but I don’t think particularly designed to have an electric motor installed. There is ample room however, and I installed a 6.5 x 8mm micro DC Motor rated for 1.5V 0.005A and 20000RPM. This was from my stash of parts - but originally purchased from aliexpress.

Installing the motor means changing the sequence of assembly slightly, and also solving a few problems:

Note the reverse protection diode mounted close to the engine on a small piece of protoboard. Also important to get the polarity for the motor correct so the propeller doesn’t spin backwards!

Test, test, test! Before taking any irreversible steps forward in the build.

Here I’m testing the motor with a 3V 555 timer PWM circuit. Yes, it is working!

With the lower wing installed, motor control wires exit near the rocket pylons:

I’m brush painting the kit with mainly the Humbrol paints supplied in the kit. Getting a reasonable finish takes many layers of thinned paint, but it’s hard to get a solid coverage without having the paint end up quite thick. PS: I now have an airbrush, so I think this may be the last time I brush paint larger surfaces!

Here are some shots before weathering and final assembly. Note that only 6 out of 8 rockets attached. Two will be in-flight!

After painting, the plane was finished with Mr Hobby Flat Matt Topcoat.

Building the Vignette Base

The vignette base is an ad-hoc rendition of an imaginary field with a stone wall and stream. Construction basics:

The rocket trails a BBQ sticks with LEDs and current-limiting resistor swathed in cotton wool and air-brished for highlights.

The backdrop is a quick hand-painted generic “cloudy sky”. This is from a trial assembly before everything is complete:

The motor control wires cut to length and terminated with pin headers. These plug into a socket embedded in the stardboard rocket tail. I’ve added some small stand-offs (actually through-hole compomenent wire trimmings) to the empty rocket pylon. These will allow the Typhoon to be positioned slightly above the rocket smoke trail.

The controller plugs into a wiring socket on the back of the backdrop:

The finished project is housed in a 30x20x20cm Acrylic Display Case:

Since the moter control is high-side, only 3 wires are needed to connect to the project: ground; LED power; motor power.

Testing the circuit on a breadboard:

Some glamour shots of the final build:

And a demo video:

Added a project page on scalemates.

Entered the Mini-Airfix Hawker aircraft model competition and was chuffed with a consolation prize.