Was it just me that noticed Tensegrity sculptures become a thing in 2020 all over tiktok and the socials? The concept is nothing new - a structural principle involving isolated components under compression inside a network of continuous tension. In its most drammatic form, it can make structures appear to float:

This model build started as an idle thought experiment. Could tensgrity principles be used to mount a model plane apparently “in flight”?

Turns out the answer is yes! It is however highly dependent on the aircraft geometry. Besides being an interesting subject, the Kawanishi K5Y1 works well given the fixed landing gear and relatively forward centre of gravity.

The K5Y1 is the Imperial Japanese Navy two-seat intermediate trainer version of the Kawanishi/Yokosuka K5Y. It was nicknamed 赤とんぼ / Akatombo / Red Dragonfly and had the allied reporting name of Willow.

I first encountered the plane when I learned from the arawasi blog there is a full size replica in the Nishiki Secret Base Museum. 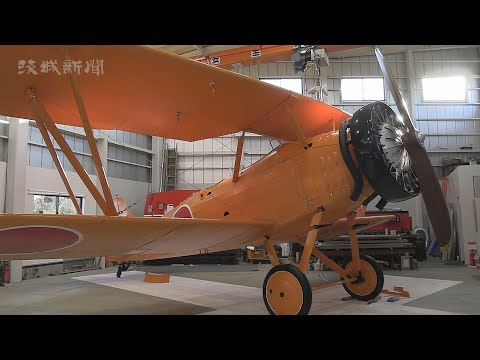 I found the ARII 1:72 Willow kit in the racks of a local hobby store Hobby Point

It is a pretty old kit (1995) molded in brittle orange plastic with quite a bit of flash. Details are not great and fit is so-so. But it is an interesting subject!

Pilot features were not molded very clearly. I did my best to give them real faces - seems to work at a distance but not up to close inspection.

A quick 360˚ around the finished model:

The result is quite pleasing - the place is slightly “hovering” above the stand. And it has a nice wobble when nudged. Next time I should get some transparent fishing line - the white cotton was the best option I had on hand.

With some mock clouds to hide the stand:

At home on a bookshelf: