Reproducing a famous photograph of the fire-fighting efforts aboard the HMS Sheffield after is was hit by an Exocet on 4 May 1982.

A old Dragon kit of the HMS Sheffield in 1:700 landed in my lap just in time for the Falklands 40th Anniversary group build organised by Peter Chiang of Hobby Bounties. The group build entries were displayed - along with much more - a the brilliant Kits for Kids event held at ITE on 2022-06-18.

The kit I have is from around 1996 I think. The decals died long ago, but the molding and detail is actually very good and stands the test of time. Modern re-boxings are still available with some extras like PE for fittings including the big ass radar. I used some generic 1:700 left-over PE for railings etc, but that radar would have been a nice addition.

About the HMS Sheffield

The Type 42 or Sheffield class, was a class of fourteen guided missile destroyers that served in the Royal Navy.

She was part of the Task Force 317 sent to the Falkland Islands during the Falklands War. She was struck and heavily damaged by an Exocet air-launched anti-ship missile from an Argentine Super Étendard aircraft on 4 May 1982 and foundered while under tow on 10 May 1982.

The loss of the Sheffield was one of the notable shocks for the British task force. Historigraph covers this in an excellent documentary “Exocet Attack on HMS Sheffield”: 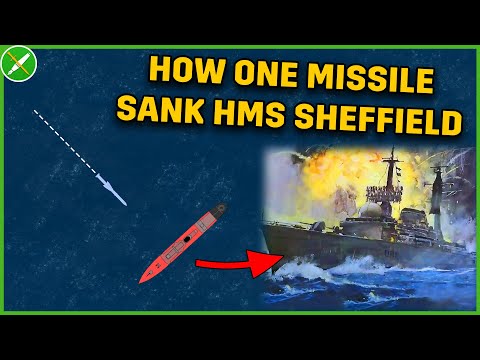 There is a famous press photo of the HMS Sheffield taken within hours of the strike. It was reprinted in the Guardian article: Revealed: catalogue of failings that sank Falklands warship HMS Sheffield.

This became the inspiration for the build - aim to reproduce the photo reasonably accurately. The fact I’ve only seem this in B&W meant that certain artistic license was required especially when it came to sea and smoke colouring.

To the extent I kept track of this…

It is an old kit but pretty well detailed for all that! I got this as a club “pass around” and I think everything is here, although decals were DOA.

Roughing out a base from high-density foam

Basic ship build complete. I added railings prior to painting so that all the CA sins get hidden. Possible in this case because there’s no complicated masking or deck paint scheme required.

Test fit on the base.

Building up the base with foil, tissue and mod podge.

Before the seascape painting begins…

Primed the base in black then applied a first series of paint layers:

The photo depicts a Sea King coming in to land and I presume help with the crew evacuation. I used one from the Trumpeter 03438 1:700 Sea King kit.

The crew are gather on deck in preparation to being evacuated on the attending frigates Arrow and Yarmouth. I used I-don’t-know-how-many from the excellent ION Model 1:700 3D-printed Royal Navy Chilling on deck. They got painted over a few evenings!

All the basics are now ready for assembling the diorama…

On the base. Note the Sheffield has grown some aerials (stretch sprue) and some rigging. Water hoses are hanging over the side - used by a fire-fighting crew operating from a small ship’s boat to attack the fire from seaboard-side.

With some effects building up:

At the Kits for Kids Exhibition

Taken by a friend with a much better camera;-)