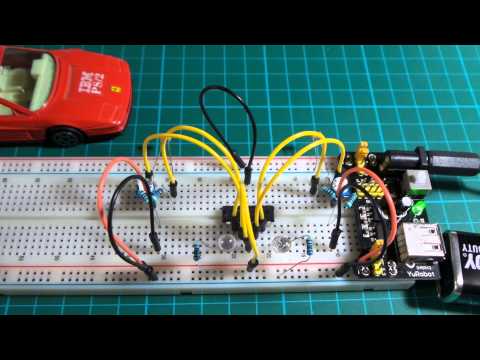 The particular LDR used has a range of about 200Ω (bright light) to 20kΩ (dark). However the ambient light conditions used for testing the circuit exhibited a typical range of 2kΩ-5kΩ, hence 4.7kΩ is selected as the common resistor value in the bridge so that we can drive positive and negative voltages from the bridge. A 50kΩ variable resistor opposes the LDR, so that the actual threshold level can be trimmed.

Note: the circuit as described does not follow best practices for tethering the unused OpAmp units in the LM324 since this is only a test and it didn’t have a noticable impact on behaviour.

For plots of received light to triggering, see the LDRComparator project. It is pretty much identical to this circuit except uses a single LDR only and monitors results with an Arduino.